Secrets of the Stone Circles 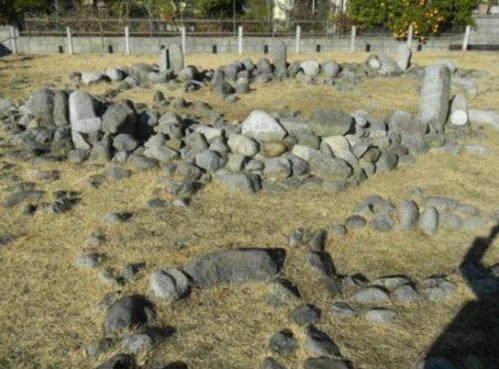 Above: The Tabata stone circle, at Machida in Tokyo

One of the greatest mysteries that archaeologists are trying to unveil is that of the stone circles.

Ceremonial stone circles first appeared at the beginning of Jomon era. Hundreds of stone circles and stone features have cropped up all over Japan.

A stone circle from the Early Jomon period was found at the Wappara site in Nagano prefecture. It consisted of upright long stones arranged in a circular pattern.

Elaborate stone circles were found at several sites in the Chubu region from the Middle Jomon era and archaeologists have discovered extremely large numbers in Hokkaido and northern Tohoku from the Late and Final Jomon era.

The first type is the “sundial” stone circle. It consists of one large upright stone in the center of a small stone cluster that had long stones placed in a radiating pattern.

Rocks had to be carried 5 to 7 kilometres from the Akuya River east of the Oyu site to construct the two stone circles.

The other kind of stone circle consists of stones arranged in circular or square patterns. One example is the Komakino site in Aomori prefecture where a large stone circle made of three concentric rings was excavated. The stone circle was constructed using about 2,400 boulders from the Arakawa riverbed which was nearby but 70 meters lower than the higher ground where stone circle was.

The Morimachi stone circle, Washinoki ruins, near Hakodate city, Hokkaido, has three circles and is about 37 m in diameter and is one of the largest stone circles.

Other kinds of stone clusters have been found.

At the Monzen site in Iwate prefecture, an arrow-shaped stone feature that was made up of about 1,350 stones, with 15,000 stones densely scattered on its eastern side. The stones were granite beach gravels and must have been transported from the nearest beach which was 1 kilometer away. See access and accommodation map.

Why did the Jomon people go to all this trouble and work to construct the stone circles and stone features?

It was a feat for prehistoric peoples dragging huge stones up mountain sites without cranes, wheels and other modern-day sophisticated tools … to remote dangerous terrain such as the one at the top of Mt Komekamiyama, see below. 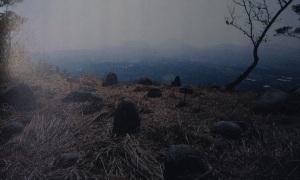 Stone circle at the top of Mt Komekamiyama

Stone circles are often located at a site usually a mountain location from which the sunset or stars such as Polaris could be viewed at the time of the equinox or solstice. Some scholars think that some of the stone circles were designed and used for social and religious rites marked by or coordinated by some kind of astronomical calendar.

Some of the stone circles in Japan have alignments that are useful for calendrical reckonings, and are noted to be similar to that found at the Stonehenge in England but that the stones are usually shorter. For example, it has been observed that the place of the sunrise over Mount Tsukuba on the morning of the winter solstice was marked by extending a line from the central marker of the stone circle at the Terano Higashi Site of Totigi.

There are also scholars who think the chosen locations of the stone circles for sightings of the heavenly stars such as Polaris – showed the Jomon people’s sense of awe of celestial phenomena, the worship of celestial beings, or a world view, or perhaps was evidence of a nature worship such as of sacred mountains.

Others think the sites were burial marker sites or cemeteries since burial pits or graves have been excavated under some of the stone circles or near them. 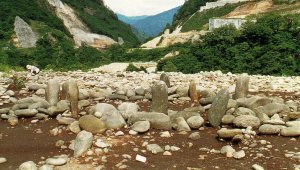 It is likely, with so very many stone features of different kinds and spanning thousands of years, that the Jomon stone circles were used for various purposes at the different locations by different Jomon tribes.

The style of the stone circles is thought to be unique to Japan and to have been developed independently of other regions in East Asia because the stone features elsewhere are very different.

For field visits to stone circles, try one of these more accessible locations:

The Oyu Stone Circle Museum, directions and info here. Oyu Stone Circle is a 4,000 year old site comprising two large circles and a number of other stone structures and ruins. The Nonakado is 42 m in diameter while the Manza is 48 m. To construct the two circles, rocks were carried from the Akuya River, about five kilometres away east of the site. Important artefacts, including bowls, urns, charms and tools have also been excavated from the site. Address: Aza, Manza 45, Oyu, Towada, Kazuno-shi, Akita-ken 018-5421, Japan. Access: From JR Kazuno-Hanawa Station: 20 mins by Shuhoku bus bound for Oyu Onsen; from Kanjo-Resseki-Mae bus stop: immediate access.

The Komakino stone circle (see images) in Aomori prefecture has triple concentric circles and outer stone settings. Many artefacts as well as more than 2000 stones, including river rocks, that formed the ceremonial stone circle, were unearthed at Komakino in the south of the city. The circle is dated to the Tokoshinai phase of the early part of the Late Jomon period. The stone circle consists of 3 parts, center, ring, inner ring and outer ring. The stones of the inner and outer rings are arranged in a unique but orderly pattern. Flask-shaped pit burials, burial jars and clusters of post-molds, storage pits, a midden, a path, spring water filter and two pit dwellings were also excavated. Because there are so few houses, the site is thought to have been a cemetery and multi-function ritual center where various ritual activities took place. To visit, contact The Cultural Assets Section, Education Board, the city of Aomori. 2-1-1 Yanakawa, Aomori-shi 030-0021 Phone: 017-4796

The Ono Stone Circle Site, a Middle Jomon site, was excavated in the Kiso Valley, Nagano (Sasaki 2002). The outer diameter is 22 m while the inner diameter is 17 m. The circle which has about 300 stones, has about 20 burial pits at the west and central parts of the site; the total estimated number of burials could be at least 200. The site is thought to have been used for seasonal rituals. Unusual for stone circles, nearby the site are pit dwellings.

The Oshoro stone circle, near Otaru, Hokkaido is oval shaped (33m by 22 m) with a small circle inside. Other photos of the site may be viewed here. Access: JR Shioya station or Ranshima station. For directions see the JNTO map, see inset.

The Isedotai stone circle, Kita-akita city, is a large ritual ground dated to around 4000 years ago with an excavated area of approximately 2000 m2 with several stone circles, gravesites, and the remains of several buildings. Access: 14 mins by car from Takanosu Station.

Several types of wood, earth, and stone features were constructed by Jomon people, including the large wooden henges of sites such as Chikamori, Mawaki and Sannai-Maruyama. These sites with the remains of large posts of kuri set upright in the ground are known to have been made only by North Pacific sedentary stratified hunters and gatherers.

b. Chikamori Hamlet site (dated to the Final Jomon) in Kanazawa has the six post structure at the Chikamori site, Kanazawa Prefecture, had the same function. Such places were designed to map out the yearly cycle, and to permit local people to participate in the ceremonies of the cycle either by living at the site or coming to participate at these communal religious sites. For access <a href=”https://heritageofjapan.wordpress.com/wp-admin/e130500b@pref.ishikawa.lg.jp%20″&gt;contact the Ishikawa Cultural Asset Office.

c. Mawaki site (Final Jomon) in Iwate prefecture. Excavated finds include dolphin bones (dated to early Jomon and Middle Jomon periods), earthern masks and carved wooden poles like totem poles were unique in Mawaki. The remains of enormous wooden poles placed in a circle are the key attractions of the Mawaki ruins. For access see this map.

The Duality of the Jomon Group Structure, by Tatsuo Kobayashi

8 responses to “Secrets of the Stone Circles”