The study below shows that mitochondrial haplogroups D5b2, N9b1, M7a1, N9a, M9a, D4a, D4b, D4j, G1a, F1b were detected from the Kofun Period tumulus site samples studied. The study also notes that while Jomon period D4 was lower than the following periods but that D4h from the Jomon period disappears after the Kofun period.

Genomic DNA was extracted from 22 protohistoric Kofun skeletons excavated from Tohoku and Kanto region of Japan, and their mtDNA haplogroups and their frequencies were compared to those of the Tohoku Jomon skeletons and modern-day individuals inhabiting Tohoku region. Consequently, mtDNA haplogroups and their frequencies of the Kofun skeletons were much more similar to modern-day individuals than to Tohoku Jomon people. This result suggests the fact that the genetic influence of the Yayoi immigrants had already become evident in Eastern Japanese people in the Kofun era. 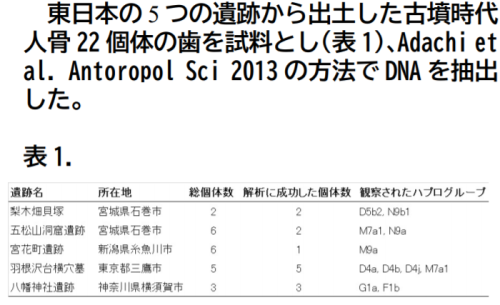 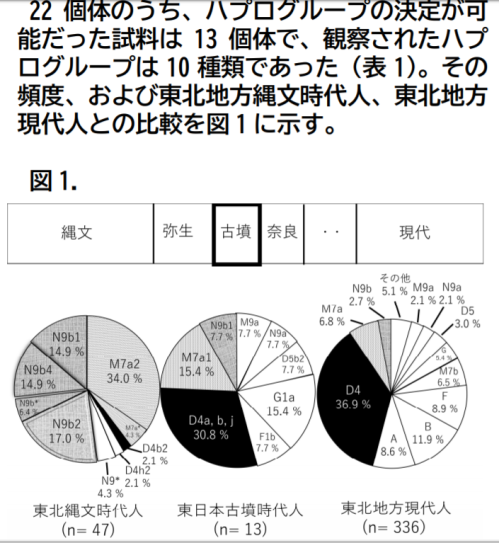 Among other findings, it was observed “One noteworthy aspect is the recognition of pronounced elements deriving from the Korean peninsula for various types of grave goods. Also, for the Ōmurodani tomb group of Nagano prefecture, there was a report on a piled-stone tomb with a steeply corbeled stone chamber.71 Examinations are made of the nature of the Haji and Sue72 ware ceramics recovered from the mound, and of the derivation of the corbeled stone chamber.”