In the news: Hokenoyama tomb in Nara – Queen Himiko’s tomb? 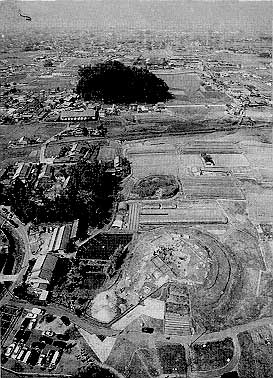 RESEARCHERS BELIEVE the Hokenoyama tomb in Sakurai, Nara Prefecture, seen here from above, is the oldest keyhole-shaped tomb in Japan. KYODO PHOTO

KASHIHARA, Nara Pref. (Kyodo) The Hokenoyama tomb in Nara Prefecture, found to be the oldest-known keyhole shaped burial mound, may be evidence that the legendary state of Yamatai ruled by Queen Himiko around the early third century was located in the area.

Two conflicting theories over the location of the legendary kingdom — one suggesting a site in the Kinai region and another an area in northern Kyushu — have long been topics of debate in academic circles.

Researchers here said burial chambers dating back to the mid-third century have been found at the Hokenoyama tomb in the city of Sakurai, and the raised burial area is one of the largest discovered from that time period.

The keyhole-shaped tomb, which has a rectangular area at one end and a raised area at the other, is typical of tombs in which high-ranking people were buried in primitive Japan.

According to Takayasu Higuchi, head of the prefectural Archaeological Institute of Kashihara, wooden beams surrounding a coffin in the 80-meter-long Hokenoyama tomb apparently date from the third century.

The chamber measures 7 meters x 2.7 meters and is believed to have housed a coffin measuring 5 meters x 1 meter, surrounded by vertical beams and a number of round stones, Higuchi said.

The “gamontai shinjukyo” mirror, which was also found in the tomb, could be one of the 100 bronze mirrors described in “Account of Wa People,” a sixth-century Chinese chronicle, according to Higuchi.

The chronicle, which describes Queen Himiko’s legendary state of Yamatai that dominated Japan in the late second and early third centuries, says Wei Kingdom in China sent the mirrors as gifts to Himiko after she sent a friendly mission to China in 239.

The mirror measures about 19 cm in diameter and has images of gods and mythical animals in relief on the reverse side.

Similar mirrors have been excavated from tombs in the Kansai and eastern Shikoku regions. The discovery of the mirror in the Hokenoyama tomb suggests the possibility that Himiko’s Yamatai Kingdom was located in the prefecture. There has been a long dispute over, whether the kingdom was based in Kyushu or in an area covering Nara, Kyoto and Osaka prefectures.

Kunihiko Kawakami, a senior researcher at the institute, said he believes the occupant of the coffin was a powerful local leader belonging to the generation of the father or grandfather of Himiko.

Meanwhile, Masao Okuno, a professor at Kiyazaki Municipal University who supports the theory that the historical site rests in northern Kyushu, said his rivals are forcefully trying to connect the tomb and the Yamatai Kingdom.

Nara mound is confirmed as the oldest of its kind

KASHIHARA, Nara Pref. (Kyodo) An ancient mound in Nara Prefecture was confirmed Wednesday as the oldest of its kind in Japan, supporting the hypothesis that a legendary ancient kingdom governed by the female ruler Himiko was based in the Kinki region, archaeologists said.

It has long been a matter of dispute whether Himiko, whose reign is shrouded in mystery, ruled from northern Kyushu or the Nara region.

Tests on a wooden board found in a trench surrounding Katsuyama Mound at Makimuku in the town of Sakurai show it was from a tree felled in the year 199, said researchers at the Nara National Research Institute for Cultural Properties. The board is believed to have been used in the mound’s construction.

The Archaeological Institute of Kashihara said the board is also believed to have been used for ritual events on top of the mound, and that the mound was probably built at the beginning of the third century.

Katsuyama Mound, which is about 110 meters long, is thought to be more than 20 years older than Hokenoyama Mound in the same city.

The finding is considered significant, especially as the existence of such a huge circular mound with a rectangle shape at the front suggests Himiko governed her realm from the southeastern part of the Nara Basin.

Mounds of this type are believed to have been a symbol of royal power, and the period when Katsuyama Mound was built roughly coincides with the time when Himiko was in power.

According to the archaeologists at both institutes, the Japanese cypress board, 41 cm long, 26 cm wide and 2.5 cm thick, was used immediately after the tree from which it was cut was felled. The age of the board was determined through dendrochronology, the science of dating past events or climatic changes by a comparative study of tree growth rings.

Considering other finds, such as wooden poles in the trench surrounding the mound, the board was probably used in construction of a building related to a burial rite, the archaeologists said.

The Makimuku remains are considered the origin of the Yamato regime, which first united Japan and ruled from at least the fourth century. They are also thought to be the possible site of the Yamatai-Koku kingdom, which thrived under Himiko’s leadership.

More than six mounds are concentrated at the site.

However, earthenware discovered earlier in the trench was from the middle of the third century, contradicting the evidence of tree rings, and thus leaving the true date of the mound open to dispute.

Chinese history books said Himiko became queen at the end of the second century and in 239 dispatched a delegation to a Chinese kingdom. The following year the delegation returned to Japan with a gold seal and other ritual items. Himiko died around 248.

None of these stories, however, are supported by hard evidence and even the location of the ancient kingdom has not been determined between northern Kyushu and the Kinki region.

Kunihiko Kawakami, vice director of the Archaeological Institute of Kashihara, said the finding definitely confirms that there was a mound there in the early third century.

“Further studies on mounds in the second century will lead to the conclusion that the origin of the Yamato regime was one century earlier than is believed under the current theory,” he predicted.

“The finding supports the belief that the Yamatai kingdom of Queen Himiko and the Yamato regime occurred at the same time,” he said.

Hironobu Ishino, professor of archaeology at Tokushima Bunri University, said, “Whether the Yamatai-Koku kingdom was located in Kyushu or Kinki, it is true that the powers who built these huge mounds were later linked to the Yamato regime.”