Jomon Dogu: The Mystery of the Broken Clay Dolls

More than 100 of these Late Jomon-Final Jomon period broken clay figurines were excavated from the Okumiomote site, Asahimura, Niigata prefecture (Asahimura Education Board)

Why did the Jomon people make so many clay dolls and figurines? What were they made for? How were they used?

From Middle to Late Jomon periods, the Jomon people made large numbers of human figures from clay, especially in the Chubu region. These figurines mostly represent pregnant women, a typical example and a famous figurine is called the Jomon Venus figurine. Such clay figures have been discovered in great numbers in the eastern parts of Japan and in Kyushu, particularly in the area around the outer crater of Mt. Aso. 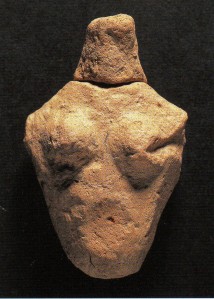 Figurine from the Kayumi Ijiri site

The earliest figurine found (at the Kayumi Ijiri site in Mie prefecture) is dated from the Incipient Jomon period. It had rounded breasts that suggested the figure was that of a woman’s. Only a few clay figurines from the early periods have been found and the figures usually had very clean and curved lines and modern looking abstract forms. Many more clay figurines were produced during the Middle Jomon periods, but the largest numbers with the most diverse forms and shapes date from the Late Jomon periods.

Why were there so many female figurines and pregnant-looking figurines? Who did they belong to?

Some Japanese archaeologists believe the pregnant figurines represent an earth goddess or deity. With genetic studies showing some Jomon people to be bearers of Y-chromosome haplogroups D and C which are related to Tibeto-Burman and Buryat-Siberian populations – among whom the worship of earth goddess and fertility goddess was common, this theory now has strong support.

Common to prehistoric and ancient Central Asian and Eurasian populations was the worship of an Earth Mother (Siberians and Mongols) or Great Goddess who assisted in the creation (Siberian) or childbirth process (Turkic-Tungus); or the Great Mother figure associated with Earth and Nature (Yakuts). Figurines extremely similar to some Jomon dogu have been fashioned in eastern Siberia’s Malta– Buret and Serbia since Palaeolithic times.

Other figurines, particularly those of western Japan may have been connected to agricultural fertility and rice cultivation in the Late Jomon of Kyushu. Perhaps they accompanied prayers for abundant harvests. Others may have been ancestral gods. Others think the figurines were female because the clay dolls were made and owned by women and were a symbol for reproduction and the regeneration of life. They may have been used for protection against the risks of childbirth, illness and death, or they may have been used in fertility rites to make their chances of having babies or of giving birth to healthy babies more successful.   Most of the Jomon figurines do not look like real people and are not realistic depictions but are whimsical or have distorted forms with large faces, small arms and hands and compact bodies. Some of the later figurines look like people wearing goggles (and spacesuits) that have given rise to wackier theories that the Jomon worshiped ancient spacemen.

Some of the northern Middle Jomon period figurines were slab-shaped. However, styles became more varied during the later part of the era, and included heart-shaped, triangular-shaped figurines, horned-owled, cat-faced and slit-goggled figurines.

Japanese macaque, Totsurasawa site, Aomori prefecture, Late Jomon.
Some of these animal-like figurines had upright bodies with enlarged breasts and huge buttocks.
Many of the figurines were made and laid out specially or in public communal settings, which tells us they were likely to have been used in magical rites or ceremonies probably to aid or celebrate the success of important occasions of fishing, hunting expeditions and childbirth. 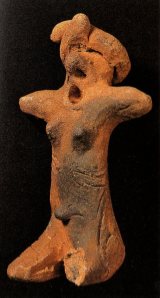 A few heads are crowned with a coiled snake. Experts believe the figurines were used during snake-cult ceremonies performed by female shamans. The animal-like faces are usually telltale signs of animistic forms of nature worship; that is, animals in nature were sacred to or revered by the Jomon people. (Similar cults are known to have existed from pottery of a shaman with snake atop the head from the Yang-shao culture in Pan-shan China 3,000 BC and with Buryat shaman traditions that revere the snake in their rituals and that include a drumstick that has a carved snakehead at its end, as well as wands or shaman dresses that are decorated with ribbons symbolizing snakes.)

The sacred snake was most likely the mamushi, a deadly snake that could be found at high altitudes and in the cool mountains and around Lake Suwa where the snake-worshipping people of the Middle Jomon people lived. One poisonous bite of the mamushi upsets the brain and nervous system, and the Jomon people would have been in awe of this animal.

If so, another question scholars ask is, were there shamans in Jomon society or powerful leaders who were performers of magic and rituals, like in other similar cultures elsewhere in the world?

Most figurines were found in the midden dumps and around large Jomon settlements in Yamanashi prefecture. In some places, small numbers of figurines were intentionally buried, inside small, simple stone circles. Clay figurines were clearly used as burial offerings only at the end of the Jomon era in some Hokkaido sites.

To view the virtual gallery of Jomon figurines, click on the tabblo below.

The Jomon Figurines of the Kaminabe Site, Kyushu, Japan by TOGAWA, Minato, June 2003

The cult of the serpent: An interdisciplinary survey of its manifestations and Origins by Balaji Mundkur

Reassessing the ‘Neolithic’ in the Jomon of western Japan, Documental Praehistorica XXXIV (2007) by Simon Kaner and Takeshi Ishikawa

2 responses to “Jomon Dogu: The Mystery of the Broken Clay Dolls”