The typical Jomon house was pit house that had a main pillar, whose hole was dug the widest and deepest into the ground, that was surrounded by other wooden upright supporting posts.

Earlier houses tended to be conical or have floors that were circular.

Earlier pit houses were round.

This one has a smoking ditch beside the entrance. (Reconstructed pit house, Kushiro Marsh, Hokkaido)

Later houses had square or rectangular floors with rounded corners. 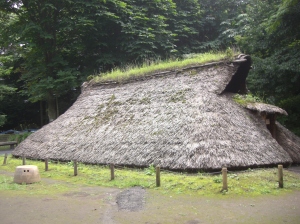 The roofs, supported by five or six posts and a central pillar, were thatched with kaya (miscanthus) grass that helped drain off rainwater into the surrounding ditches.

The earthen floors tamped hard, were sometimes sunk half a metre into the ground, or sometimes covered in flagstone. 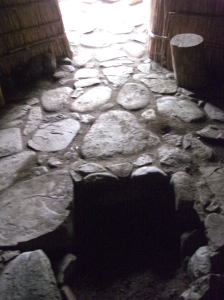 Indoor fireplaces were common as were storage pits and smoking ditches. 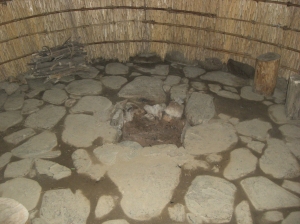 Apart from the common pit dwelling houses, some settlements had raised buildings that were probably storage houses or warehouses. Hundreds of these raised storage houses and more than 800 pit houses were found at the site of the Sannai Maruyama village. In addition, the large building with huge columns is an outstanding architectural feature of the Sannai-Maruyama ruins.

Longhouses were built in the largest settlements of the Jomon era. At the Aizu-Wakamatsu site in Fukushima prefecture, longhouses were excavated from a ring-shaped settlement surrounded by drainage ditches that was of the Middle Jomon period between 4,000 to 5,000 years ago.  Three fireplaces fit one longhouse.

It appears that the Jomon people were skilled in working with wood from an early period. The Jomon people cut down trees to size for building things and for erecting buildings. From the Sakuramachi site in Toyama prefecture of the Middle Jomon period, a large number of wooden items, including more than 100 wooden beams, crosspieces, and posts were found.

The oldest piece of wood used in Jomon construction is reported to have been found in the Yokoo site in Oita prefecture is dated to 10,000 years ago. The 3.8 meter-long piece of wood (had six circular joint holes in it about 3 centimeters in diameter and) is thought to be a roof beam from a house built on stilts.

Several other pieces of Jomon construction timber from the Oyabe site in Toyama prefecture dated to 4,500 years ago, revealed that the Jomon people were already using an advanced construction technique called watariago-shiguchi in Japanese. The technique that joined building timbers together with a mortise and tennon joint into the form of a wooden cross, was used in the 7th century structure of the Horyuji Temple which is oldest surviving wooden building in the world.

Woodworking was an important craft or skill for the Jomon people, used for making dugout canoes, wooden vessels and especially for building. The Jomon people made wooden frames for the walls of storage pits and for the posts of their buildings.

They had learnt to use and work with many kinds of trees including chestnut, Japanese cedar tree (Cryptomeria japonica), mukunoki (Aphananthe aspera), inugaya (Cephalotaxus harringtonia), Japanese nutmeg (Torreya nucifera or kaya), camphor (Cinamonium camphora or kusunoki).