A domesticated variety of peach appeared very early at Jōmon sites in 6700–6400 BP (4700–4400 BCE). This was already similar to modern cultivated forms. This domesticated type of peach is considered to have arrived in Japan from China. 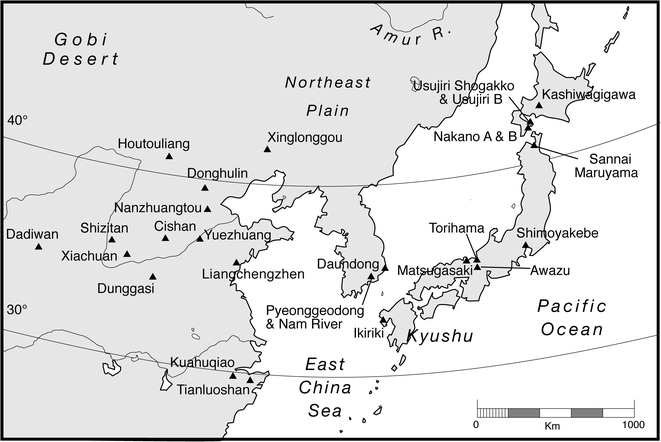 A study by Zheng and Crawford reported,

“The Ikiriki site, Kyushu, Japan is stratified with Early, Late and Final Jomon occupations as well as a Yayoi component. It is a well-preserved wet site on the coast about 800 km from the Yangzi River mouth. Forty-one plant taxa and a dugout canoe are reported. Ten peach stones (eight with relatively complete measurements) are from the Early Jomon levels (VII and VIII) while eight are from later Jomon contexts… Jomon subsistence is complex and varied, including hunting, fishing, gathering,
resource management, limited crop production depending on the
region and period and includes a wide range of anthropogenic
habitats.”

The earliest domesticated peach was found at the 8,000 year old Kuahuqiao site at the early neolithic site of Kuahuqiao culture (跨湖桥文化 Kuahuqiao Wenhua o (ca. 8000–7000 BP)) near Xianghu village, Xiaoshan District, in suburban Hangzhou, Zhejiang, China. The second oldest remains of peach have been found at Neolithic Tianluoshan site, also in Zhejiang Province. The site is located near the place where the Qiantang River flows into Hangzhou Bay, and it has a history of 8,000 years. Rising sea levels may have suddenly deluged the area around 7,550 years ago. Large quantities of wooden, stoneware, unglazed pottery, sophisticated painted pottery, jade artifacts, a canoe and other cultural relics were unearthed from the site. Villagers made pottery with wild rice as a bonding material.

The oldest archaeological peach stones from the Kuahuqiao (8000–7000 BP) and Tianluoshan (7000–6500 BP) sites and these first peach stones in China most similar to modern cultivated forms are from the Liangzhu culture (ca. 5300 to 4300 BP), where the peach stones are significantly larger and more compressed than earlier stones.

The peach stones reported from Japan much earlier (6700–6400 BP) are large, compressed-stone peaches thought to be introduced to Japan from a yet unidentified source population in China but that was similar to the Liangzhu
culture peach from a later date of c. 5300 to 4300 BP.  A study by Gary Crawford et al., of peach stones recently excavated from the Kuahuqiao, Tianluoshan, Bianjiashan, Maoshan, and Qianshanyang sites, all in Zhejiang Province, were compared with samples from Japan.

The set of peach stone measurements from the Early Jomon levels at the Ikiriki site in Japan indicate that peach between 7000 and 6000 BP was, indeed, being differentiated from the wild form. Their mean approximate volume is similar to that of the Maoshan sample. The earliest peach stones are associated with radiocarbon dates from level VIII that range from 6700–6400 cal. BP [27]. The W/Ds ration is 1.3, indicating significant compression, more than the Bronze Age Qianshanyang sample exhibit. The source of these peach stones in China cannot be determined yet, but if the dating is correct then apparently peach was domesticated by 6400 BP. Peach was introduced to Japan, evidenced at the coastal Ikiriki site, a distance of about 800 km from the Yangzi river mouth. A few more stones, somewhat larger and more compressed than the Early Jomon specimens, have been recovered from later Jomon deposits at the site indicating some continuity in their use. The only other Jomon period peach stones are from Late Jomon deposits at Nabatake, also in Kyushu.

The archaeological record is at odds with the current wisdom regarding its domestication, particularly the notion that it was domesticated in northwestern China. The archaeological database for peach has long been recognized as confirming the view that the peach had a long association with people in China [… The first written reference to peach is found in China’s earliest agricultural almanac, Xiaxiaozheng, which refers to the Xia Dynasty (ca. 4100–3600 BP) while the Shijing (Book of Odes, a compilation of poetry spanning the period ca. 3000 BP–2500 BP) has the earliest botanical description of peach . Peach has been an important aspect of traditional culture in China, and was considered a symbol of immortality in Daoist mythology while the fruits are important gifts [55,56]. Twelve of the Chinese sites from which peach stones have been recovered are in the lower Yangzi River valley. Most of the other specimens are from the middle and upper reaches of the Yangzi valley or from southern and southwestern China. Peach in the form of charred stones is reported from only three sites in North China where the only wet site reported is Jiahu. Peach remains have not been reported from Jiahu. Peach stones preserve well after charring; flotation to recover charred plant remains is relatively common in the north. If peach were economically significant there we would expect better representation in the archaeological record, including at Jiahu. Although preservation bias may be a factor in the few reports of peach from North China, given the extensive sampling there and the research at Jiahu, peach was likely not a significant resource there during the Early Neolithic.
Not until about 4000 BP does the distribution of archaeological peach stones extend west of the Hujiawuchang site or north of Egoubeigang although peach had reached Japan by 6500 BP. The data reported here provide more specific documentation of a long developmental sequence in eastern China that resulted in the plant’s domestication. The commonly cited northwestern China region can be ruled out as the region where peach was domesticated. Although North China cannot be categorically ruled out, the most feasible working hypothesis is that peach was domesticated in the Yangzi valley. Finally, tree fruit management and domestication undoubtedly played a significant role in the early phases of agricultural development in China as well as other parts of the world.”

Xiaoshan was the birthplace of Zhejiang Civilization and its Kuahuqiao Culture emerged about 8000 years ago. It is also where Yue Culture-originated, the earliest prehistoric civilization in China.

“Kuahuqiao Culture was quite different from other excavated relics, such as Hemudu Culture and Majiabang Culture. The history of rice cultivation was proven to have begun 1000 years earlier than previously believed and the earliest unearthed canoe in China was found. It can be concluded that Kuahuqiao Culture existed 1000 years earlier than Hemudu Culture (about 6,000-7,000 years ago) and is the earliest known Neolithic cultural sites in the Zhejiang Province.”