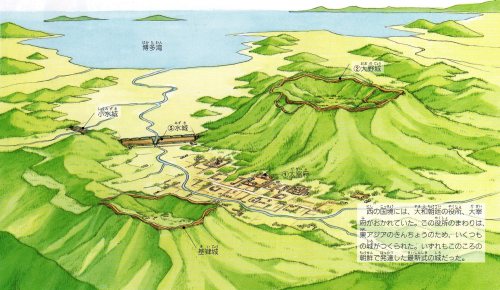 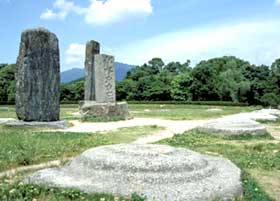 The city served an important function for conducting trade and diplomatic contacts with China and other Asian countries. Dazaifu hosted foreign embassies from China and Korea. Korokan, a guesthouse for foreign embassies, was established. 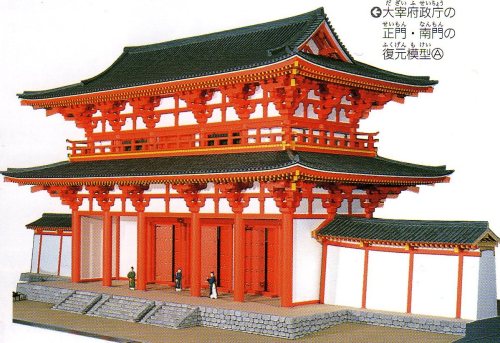 Reconstructed model of the seimon gate to Dazaifu city

In 650, Tang dynasty China had allied itself with Silla. This move threatened Japan which was frightened that China might expand into the Korean peninsula and Japan as well. In 66o, 100,000 men were sent by the Tang court supported by Silla troops to attack the king — supposedly to punish Paekche for their invasions of Silla territory. At the same time, Silla attacked from the East with troops of 50,000 men. The king of Paekche surrendered and the state of Paekche disappeared.

In the same year, a movement within Paekche to try to restore the kingdom sought help from Japan and to enthrone its prince (sent to Japan as hostage in 631) as king  of new Paekche. In Japan, Prince Naka no Oe, now enthroned as Emperor Tenji decided to send a military expedition in support (thousands of troops, considerable supplies and a fleet of 170 ships), and Paekche rebels regained control of the old Paekche capital. However, in 663, the year that Dazaifu was established, the armies of Silla and Tang China attacked the Korean kingdom of Paekche which had sought Japanese military support in recent years before.   Japan lost four hundred battle ships at the mouth of Kum River, sunk by Silla troops that had joined forces with the Tang army.  With that defeat, Paekche was crushed and Japan lost its foothold in the Korea totally and was completely isolated from the Korean continent.

Following the years of defeat, a wave of Korean refugees entered Japan, according to Nihon shoki, an influx of Korean artisans, builders, administators, various specialists whose knowledge and services were used to strengthen the Yamato state, increase its revenues and tighten its control.

Despite the Chinese victory in 665, the Chinese from Tang-controlled Paekche offered a olive branch by sending a mission to the Japanese court. After that, Japan opened relations with the Tang court in China, and within two short years Japan was able to reestablish friendly relations with Tang China, Paekche and Silla as well.

Olive branch notwithstanding, the Yamato regime continued to build massive defense facilities anticipating attacks by Tang China and Silla Kingdom. The terrible defeat of Japan’s naval forces threw the Yamato government into feverish defense projects to build forts on Tsushima and Iki island and on strategic locations in northeastern Kyushu. Along a fortified line of defense they installed watertowers by which information on enemy movements could bequickly transmitted.

One of these locations was Dazaifu city — the new military headquarters for the Yamato state, situated high in the mountains behind Hakata Bay. Dazaifu was protected by forts constructed by on peaks to the north and the south, as well as by what was called a “water fortress” (mizuki) built along the Mikasa River that flowed from Dazaifu to Hakata Bay. 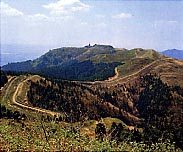 Called the “Mizuki(Water Fortress)” it was a fortress on a mound, 1.2km long and 14m high, surrounded by a bulwark. It had a moat with a width of 60 meters and a depth of 4 meters was dug and was filled with water on the sea facing the sea, hence the name, “Water Fortress”. Nihon shoki mentions that the water fortress was constructed in 664 and had high embankments for storage of water. Excavations of remains of eastern and western gates reveal the fortress’ original size and location. They also revealed that techniques used for the defense projects were similar to Korean ones, suggesting that at the helm of the engineering projects were skilled refugees from Paekche.

What were the water storage facilities for?

Some historians believe the water that the fortress stored could be released against approaching enemy soldiers, which was a military defense strategy known at the time.

Following the completion of the mizuki, Onojo castle was built in 665 performing a formidable defense role as the north fort in Dazaifu. These defense projects were usually built not only for their defense value, but to impress as well.

Dazaifu remained an important military and administrative center for the Yamato government through the Heian and Nara periods and until the Kamakura period. Then Dazaifu’s influence declined and vanished by the late Heian period becoming known only as a location for high ranking exiled courtiers.

To visit Dazaifu to see the ruins and remains of the ancient city, go to Dazaifu City website for more information.