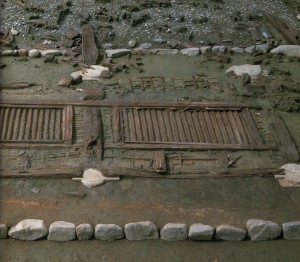 In the early eighties, Yamadadera Temple (in Nara) made the news for the amazing discoveries of the outer wall of the east-side semi-enclosed corridor containing well-preserved and intact vertical mullion windows and other identifiable items. These remains predate Horyuji Temple by 50 years, and so are now considered the oldest existing building in Japan.

1984 excavations brought forth two nearly perfect vertical mullion windows excavated from the 14th and 13th bays.  The windows being in good condition and intact gave archaeologists a clear idea of the entire arrangement of the building from granite ground plate up to the head-penetrating tie-beam. The corridors and mullion windows of the temple have been restored and excavated parts can be viewed at Asuka Village Historical Museum. The differences between the style of the corridor of Yamadera and  that of Horyuji have been noted: Yamadadera had thicker horizontal poles than those at Horyuji, and its pillars are placed at more frequent intervals than those of Horyuji’s.

Roof tiles (tanben rengemon) were also recovered from the excavations of Yamadadera, which show the influences of the mid-7th century Paekche kingdom as well as Koguryo kingdom on the Korean peninsula. The tiles were made with a pattern of a stylized lotus with a seed pod in the centre and concentric circles radiating outwards. The roof tile discoveries have aided in the reconstruction project of the eave of the Golden Hall of the temple.

Other objects such as wooden tablets and a flag “meika-ban” were also excavated from the temple site.

Watch a video clip about the amazing archaeological excavation and restoration efforts of the Yamadadera Temple (a.k.a. Jodo Temple) here.

Works of art from Yamadadera

Yamadadera is famous for the sculpture remains of the Historical Buddha head of Nyorai which was completed in 685 (the 14th year of Tenmu’s reign), that was the main object of worship in the Yamadadera lecture hall.  Only the head is left of the full sculpture, due to a fire disaster. The Buddha head reveals early Tang influences, exhibiting characteristic features of early Hakuho Period Buddhist images such as “the bright expression and boyish countenance, the eyebrows drawn out in a long arc, and the elongated narrow eyes”.

Buddha head from the Yamadadera Temple

The Nyorai image was once banked on both sides by boddihisattvas attendant figures when it stood in the Yamadadera. The sculptures now lie in the Kofukuji east golden hall. The beginning of the latter half of the 7th century, was when large-scale sanzonbutsu attendant figures came to be created in large numbers in temples all over Japan.

Senbutsu buddhist images in relief on unglazed clay tiles have also been found from the Yamadadera temple ruins. These were introduced to Japan in the latter half of the 7th century and show the mature sensuous style of the early Tang Dynasty(7th cnetury). They were made by pressing clay into moulds, dyring and then firing. Surfaces were occasionally decorated with gold leaf. Senbutsu images were usually made in large numbers for decorating the interiors walls of temples.

Outline of the National Institutes for Cultural Heritage 2007