In the news: Archaeological site in Dazaifu, Fukuoka yields the oldest (late 7th century) koseki records in the country

The front of the wooden strip, right, and its back. Photo: The Yomiuri Shimbun

FUKUOKA–A wooden strip believed to be the nation’s oldest koseki, or family registration document, has been unearthed at the Kokubumatsumoto site in Dazaifu, Fukuoka Prefecture, the municipal board of education announced Tuesday.

The strip, believed to have been made late in the seventh century, during the Asuka period (592-710), is older than Japan’s currently recognized oldest existing koseki, an artifact from the year 702 that is kept in Nara’s Shoso-in repository.

Its discovery also highlights the likelihood that the central government already directly controlled people over wide areas before the Taiho Ritsuryo–the first nationwide law, equivalent the present-day criminal code and administrative and civil laws–was established in 701. Many historians have believed centralized government came fully into being with the law’s enforcement.

The 0.8-centimeter-thick wooden strip is 31 centimeters long and 8.2 centimeters wide. It bears the character “kori,” a word for a local administrative unit used before the enforcement of the nationwide law, equivalent to a present-day “gun,” or county.

The strip also bears “shindaini,” a title established in 685, leading researchers to conclude it was made at the end of the seventh century.

Some of the text on the strip reads, “The head of the household is Takerube no Mimaro,” and, “His younger sister is Yaome.” The names and relationships of 16 members of the same community are described.

The strip also bears the terms “seitei,” or healthy men aged 21 to 60, and “heishi,” meaning soldiers conscripted from among the seitei.

According to the researchers, the strip also includes words to describe dividing a household in two and the head of the household before the division.

From these findings, the researchers believe the information on the wooden strip was an update for the Koinnenjaku, the nationwide family registration system compiled following the 689 establishment of the Asukakiyomihararyo, the legal code in effect prior to the Taiho Ritsuryo law.

Kogonenjaku, the family registration system introduced in 670, is believed to be the first such system compiled nationwide, while Koinnenjaku is believed to have been completed by 690.

Until the strip’s discovery, none of the original Koinnenjaku records were believed to exist, making the new discovery all the more significant.

Some place names, such as “Shimanokori” and ” Kawaberi,” also are written on the wooden strip. Shimanokori is located in the northern Itoshima Peninsula in Itoshima in the prefecture. The researchers believe it is the same area as the place written in the oldest family registration record in the Shoso-in repository.

The archaeological site is 1.2 kilometers northwest of the ruins of the Dazaifu regional administrative office, which oversaw the ancient Kyushu region, and about 30 kilometers from Itoshima. 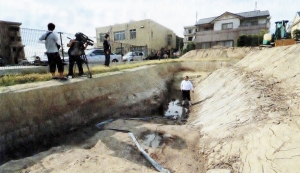 This photo shows the Kokubumatsumoto site in Dazaifu, Fukuoka Prefecture, where an ancient wooden strip was unearthed. Photo: The Yomiuri Shimbun

The wooden strip was unearthed from strata in a former riverbed during an excavation conducted prior to the construction of a condominium building on the site.

Japan’s early centralized government placed the highest importance on compiling a family registration system. By doing so, the government, supplanting powerful local clans, could gain direct control of the people, collect tax from them and impose laborious work and military services on them.

There is no doubt that the completion of such a centralized administrative framework came with the establishment of the Taiho Ritsuryo nationwide law. However, the process of how it was created remains to be learned.

The family registration information on the unearthed wooden strip–which was made under the Asukakiyomihararyo legal code from the reigns of Emperor Tenmu and Empress Jito–includes words meaning “healthy male” and “soldier.”

This discovery proves that a military-draft system and taxation classification were already in force at that time–before the establishment of the Taiho Ritsuryo law. It also reveals that regional administrative offices regularly kept track of the movement of residents in local areas.

From these findings, it can be said that rather than the well-known Taiho Ritsuryo national law, the enforcement of the previous Asukakiyomihararyo legal code was a crucial reform.

Editorial notes and further information about the koseki:

The Japanese koseki was based on the ancient Chinese hukou(household registration) system, the latter “can be traced back to the fifth century B.C. at least, during the Warring States period. It was an important part of the Chinese imperial political system for more than 2,000 years.” —  Roundtable statement before the Congressional-Executive Commission on China “China’s Household Registration (Hukou) System: Discrimination and Reforms”

“Introduced in the 6th century, the original population census in Japan was called the kōgo no nen jaku (庚午年籍) or the kōin no nen jaku (庚寅年籍). This census was introduced under the ritsuryō system of governance. During the Bakufu, there were four major forms of population registration: the ninbetsuchō (Registry of Human Categories), the shumon aratamechō (Religious Inquisition Registry), the gonin gumichō (Five Household Registry) and the kakochō (Death Registry). The shūmon ninbetsuchō was created around 1670 and was going to last almost 200 years: it combined social and religious registration, and date was renewed every six years. Several categories of outcasts were not registered at all under this system, or were registered in specific registers, for instance the Eta. The modern koseki, encompassing all of Japan’s citizenry, appeared in 1872, immediately following the Meiji Restoration. This was the first time in history that all Japanese people were required to have family names as well as given names. Although all previous social categories were abolished and almost all Japanese people were recorded as heimin (commoners), some minorities became labelled as “new commoner” or “original eta” (shinheimin or motoeta), and discrimination went on. Problems happened also at the edge of the national territory, for instance in the Ogasawara Islands.

During the Japanese occupation of Korea, the Japanese government actually created a dual system of koseki: an external (gaichi koseki) (based on the preexisting Hoju) and a domestic family registry (naichi koseki). This institutional discrimination among Japanese citizens accounts for the deprivation of Japanese citizenship for several thousands of people residing in Japan after the war….

A similar registration system exists within the public administration structures of all East Asian states influenced by the ancient Chinese system of government. The local pronunciations of the name of the household register varies, but all are derived from the same Chinese characters as that for koseki (in traditional Chinese: 戶籍). These states include People’s Republic of China (hukou), Republic of China (Taiwan) (hukou), Vietnam (Hộ khẩu), and North Korea (hoju, hojeok, hojok). In South Korea, the hoju system was abolished in 2008.”

“The koseki, or Family Registration, is the system by which births, deaths, marriages and divorces of Japanese nationals are recorded. In some sense, it is a national identity registration, since Japanese public offices collect and maintain these detailed records about all Japanese citizens. Under Family Registration Law, foreign nationals living in Japan also have to notify a municipal office of the births and deaths of their family members. When they marry, divorce, or have children, Japanese nationals, must notify a municipal office. All this and more are recorded in the koseki. A person’s koseki follows them for their entire life.

The format of a koseki has changed over the years. It used to be hand written, but is now, of course, printed on a computer, and then stamped with a hanko to verify authenticity.”

David Chapman,” Geographies of Self and Other: Mapping Japan through the Koseki“, The Asia-Pacific Journal Vol 9, Issue 29 No 2, July 18, 2011

“The Koseki plays a central role in Japanese Family Law — it is your birth certificate, death certificate, marriage license, and census information all rolled into one.

This single document is nothing less than a system of national identity registration, marking any and all changes in family composition and identity, and it thus plays a central role in matters of family law and other interactions with the government. Specifically, the koseki will be used to record the birth of children, marriage and divorce, and the death of a family member. Such events are legally effective only when recorded in the koseki.”