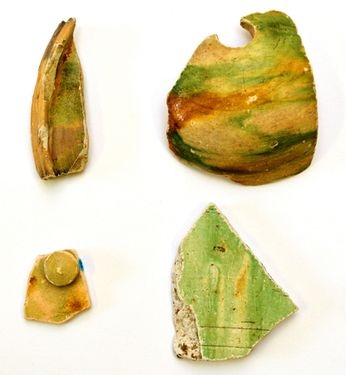 The Sancai ceramic fragment, above, was excavated from the site of the Yamada-dera temple and is on display in Asuka, Nara pref. (Provided by the Asuka Historical Museum, Nara National Research Instit. For Cultural Properties)

A fragment of a style of ceramic known as sancai that was excavated from the site of the long-gone Yamada-dera temple in Sakurai, Nara Prefecture–designated as a special historic spot dating to the seventh century–is very likely the oldest Chinese-made pottery found in Japan.

This conclusion was reached by Tadanori Yuba, deputy director in charge of the history of oriental pottery at the Museum of Ceramic Art, Hyogo in Sasayama, Hyogo Prefecture. The fragment is thought to date to the Northern Qi Dynasty (550-577), to which the renowned sancai ceramics of the Tang Dynasty trace their roots.

The fragment offers researchers clues about Japan’s foreign relations during the Asuka Period (592-710).

Yamada-dera was built by Soga no Kurayamada no Ishikawa Maro, an ally of Emperor Tenchi (formerly Prince Naka no Oe) in the Isshi Incident in 645, who was later given the coveted title of Minister of the Right.

Researchers uncovered 43 fragments of “lead-glazed pottery” including the sancai, which is fired with a glaze that includes lead oxide.

Yuba’s attention was drawn to a sancai fragment measuring 6.5 centimeters by 5.8 cm that was excavated in 1982. Features such as the faint tones of green and brown in the glaze, as well as the whiteness of the clay, are characteristic of sixth-century Chinese ceramics.

Yuba said he thought it was very likely the fragment comes from the same type of sancai jars excavated in Taiyuan, Shanxi province from the tomb of Lou Rui, a Northern Qi aristocrat who died in or around the year 570.

Until now the oldest piece of Chinese-made ceramic in Japan was thought to be a bowl dating back to the late sixth to early seventh century. It was uncovered at the Soroku-kofun tumulus on Ikinoshima island in Nagasaki Prefecture, which was built in the late sixth century.

The influence of relations with the Sui (581-618) and Tang (618-907) dynasties during the Asuka Period had been evident from temples, tumulus paintings, gardens and other artifacts, but now it seems that it could extend to the time of the Northern Qi Dynasty.

The pottery fragments are on display at the Nara National Research Institute for Cultural Properties’ Asuka Historical Museum in Asuka, Nara Prefecture.