Reblogged excerpts of “Is this 1,300-year-old dish found in Nara actually cursed?” 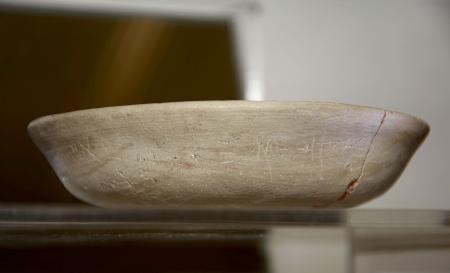 Though the current capital of Japan is Tokyo, many would argue that its traditional capital, Kyoto, is the real heart of Japan–at least culturally speaking. That said, if you you’re looking for the original capital of Japan, you’d probably be better heading south from Kyoto to Nara Prefecture. But while you should definitely stop and see Heijo-kyo in Nara City, you’ll have to keep heading south to Asuka Village to find the “real” original capital of Japan: Asuka-kyo. Of course, in the 1,300 years since the end of the Asuka Period, the capital has essentially been lost to time–all that’s left are stony remnants like those pictured above.

But that’s not the only patch of old ruins to be found in Asuka area–there are so many, they can actually get in the way of building a house! But with the news of the discovery of a piece of “cursed” earthenware, we have to wonder if maybe it’s just time for everyone to pack up and head for a slightly less historically significant area!

▼An aerial view of the excavation site where the dish was found. See this linked video.

… Asuka Village is often considered one of the most important locations in the early history of Japan due to the ancient Asuka capital and the large number of ancient structures and kofun (tumults) like Ishibutai Kofun. As such, it should come as little surprise that extensive historical research is carried out in the area, largely headed by researchers at The Museum, Archaeological Institute of Kashihara, which is located in the Asuka Village’s neighbor Kashihara City.

The Institute opened its special fall exhibition last week and garnered quite a bit of national attention thanks to a rather unique piece of earthenware(see photo at the top of page): One with what could only be described as “with a curse engraved on it”!

It’s more impressive than it looks, we promise…

While the seriousness of the message is clearly debatable, it does, apparently, make the earthenware a bit of an oddity. Researchers have told media that it’s rather rare to find inscriptions on dishes like this. In fact, the earthenware could actually be of serious historical significance. While not all of the characters were legible, the inscription makes mention that dish was property of Kawara Temple, a Buddhist temple in the area that was of considerable political importance at the time. Though Kawara Temple is now little more than ruins, this inscription could hint at a very close connection between the temple and the political center of the Asuka Period.

Or it might have just been someone trying to troll his or her very distant descendants. Which gives us an idea…

If you’re in the Kansai area, be sure to stop by the The Museum, Archaeological Institute of Kashihara to see their autumn exhibition. The special exhibit will run until November 30 and entrance costs 800 yen (US$7.46). And if you have time, we highly recommend taking a stroll around Asuka Village, too. In this humble writer’s opinion, it’s one of the most beautiful places in Japan!