Entering the realm of rice, ritual and religion

As rice-farming or rice agriculture was introduced by immigrants into Yayoi Japan, new rituals and ritual accessories associated with agriculture too appeared on the scene.  The Yayoi people performed rituals to invite or appease their local deities.

Bronze bell (dotaku) of the Yayoi period (2nd -1st c. BC) from Kobe city (exhibit of the Tokyo National Museum)

Farming scenes from Yayoi bronze and pottery art; above: rice pounding; below: granary etched on pottery 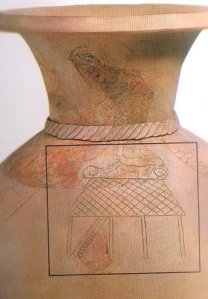 These animals likely represented local deities that were being worshipped and appeased by Yayoi people at the time.

Deer and four-footed animal, motif of a rubbing on a bronze bell 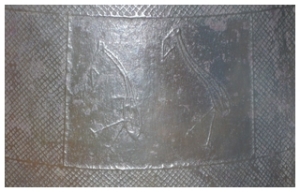 Deer and birds (herons and cranes) appeared the most times in Yayoi bronze bell art, and are thought to be especially important grain deities connected with the cyclic activity of agricultural life. Around 200 pictures of deer carved on Yayoi pottery were also discovered. (Deer appeared far many more times than wild boar on most of their bells … even though the Yayoi people preferred eating wild boar to deer. View images of bronze bells with boar and deer images (left) and of deer, heron and people on the (right) here.)

Experts believe the Yayoi people worshipped an important deer deity and they practised a magical ritual of sowing seeds in deer blood that they believed would speed up the germination of rice plants. They believed that the deer’s life force helped in the growth of rice. Since antlers were shed on a yearly cycle, the deer likely symbolized regeneration, growth and decay which the people associated with the growth cycle of plants. 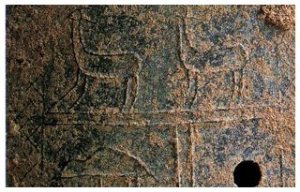 According to an ancient 8th century legend from the Nara period, rice that has been planted in the fresh blood of a deer germinates mysteriously overnight. The myth related to spring rice-planting rituals, is recorded in the “Local Record of Harima Province” (“Harima no kuni Fudoki“).

Cranes and herons were probably sacred birds to the Yayoi people. Wooden birds attached to wooden poles have been found at a number of excavated Yayoi sites. The sacred bird is thought to be symbolic of the rice spirit bird that brought the first rice seeds to man in its beak.

Reconstructed building with birds perched on roof at the Yoshinogari site

Experts believe there was a yearly ceremony performed when the Yayoi priests would don bird plume outfits, board a boat and go out to meet and call the birds (i.e. bird spirit) back. Engravings of boats and feathered priests are known from a number of pottery vessels such as the one found on a pottery jar dated to the Middle Yayoi period from Inayoshi, Tottori prefecture. What was the role of the feathered shaman priests depicted on the pottery and was the boat was a mock one or did the shaman priests actually get into real boats that were cast out to water.

The Yayoi people are believed to have used the bronze bells or dotaku during ceremonies to summon or invite the deities most important to their survival: the spirits of the rice, land (hunting), and perhaps also the spirits of their ancestors. During a Mahan ritual on the Korean continent, bronze bells were hung from a tree and rung by striking the iron clapper on the inside of the bell. Ritual bronze bells in Japan are widely supposed to have been used in a similar way.

Archaeologists have concluded that deer represented the life-giving spirits of the land, herons and cranes spirits of rice, and the human images, their ancestors by studying ancient Japanese documents and examples of folk customs as well as animal habitats.

What were the rice festivals of the Yayoi people like?

Although there are no written records to show us what the rice festivals or ceremonies were like, the Chinese Wei Zhi account does, however, in a section describe the people on the Korean Peninsula as offering their prayers to fierce gods and singing, dancing, and drinking continuously day and night, after sowing seeds in the fifth month and after harvesting their crops in the tenth month.

The pictorials of ritual dancing and mock battles engraved on one bronze mirror discovered in Gunma prefecture (see images above) are thought to be particularly significant in helping experts interpret how and when the ritual objects were used. Aside from the agricultural connection and role, experts have noted that the pictorials appear to equally celebrate warfare and hunting.

Bronze ceremonial weapons are often found buried together with bronze bells. Experts, combining information from the pictures on the jar, bells, mirror and customary and legendary accounts, picture the Yayoi people and possible shamans during their agricultural ceremonies, participating in ritual dancing, enacting mock battles and hunting scenes with their ceremonial bronze, stone or wooden weapons (spears, swords, daggers, spearheads and halberds) as ceremonial props.

One detail has puzzled historians — bronze ceremonial items were usually found buried far away from the Yayoi village settlement. Were they buried at the supposed boundaries where the spirit and human world meet?  The shaman is known from the Nara and Heian periods (and according to Nishimiya Hideki) to have had the role of mediating the spirits who died violent deaths and of pacifying “the evil and diseased spirits at the border of the living and the dead.”

The bronze mirror, according to some archaeologists, was probably worn hanging from the neck of an important person in Yayoi society, officiating at the religious ceremonies. The mirror, reflecting the sun’s rays, would have been an impressive sight, singling out the wearer as somebody of high social status or authority.

The mirrors were also exchanged with other persons with whom kinship ties were forged — this was an age when tribal blood kinship groups were formed and ties consolidated, the process, it is thought, involved various rituals concerned with the worship of ancestral deities.

Other ritual objects have also been found, like the ritually carved rock above. It may have marked a ritual ceremonial site or may embodied an idea similar to that behind Japanese shrine rituals where a god temporarily resides in the iwakura rock.

5 responses to “Entering the realm of rice, ritual and religion”