Origins of the Onigawara ceramic rooftile

Onigawara (鬼瓦 ) are a type of Japanese ogre- or goblin- gargoyle and roof tile ornamentation found in Japanese architecture. Literally translated as ‘ogre tile’, the roof tile ornaments traditionally depict a Japanese ogre (oni) or a fearsome beast, but also commonly include many other motifs such as floral (alternatively known as hanagawara 花瓦) and animal designs. Swirling or wave patterns found at the bottom right and left of the onigawara are called hire 鰭. 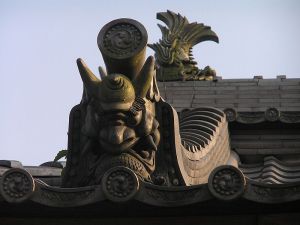 A magnificent example of onigawara at the 1,400 year old Ono-Jodoji temple. Prince Shotoku, is said to be the founder of Onomichi’s Jodoji Temple which is also famous for its connection with the Shogun Takauji Ashikaga, who is said to have worshipped here. Photo: Wikimedia Commons

Onigawara are usually ceramic but may occasionally be made of stone or wood.

The oni goblin design motif is thought to have originated from a previous architectural element, the oni-ita,  鬼板 which is a board painted with the face of an oni and was meant to stop roof leaks.

The earliest onigawara tiles are dated to the Nara Period. 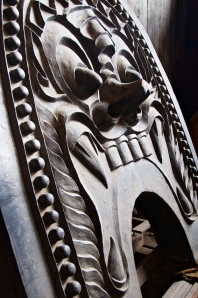 Onigawara are also be found decorating temples and palaces, not just shrines. The largest onigawara (World Guiness Records) made of clay, measures 9 m (29 ft 6 in) tall and 8.8 m (28 ft 10 in) wide, is found on the rooftop of the main building of Nenbutsushu Muryojuji Temple , Mikawa Bay. 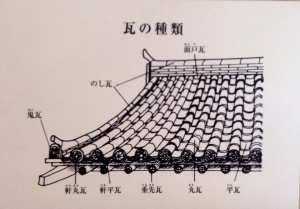 A tile roofing explanation of the different types of tiles, and the placement of the onigawara tile at the furthest edge in order to ward off evil – at the Tama Center Archaeological Center

The onigawara roof tile technique may have been introduced by Korean ceramic potters as similar onigawara tiles have been excavated in Korea, but the earliest roof tiles were from the Han Dynasty China. 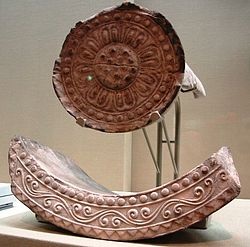 Ceramic roof tiles from Dunhuang excavations on the Silk Road 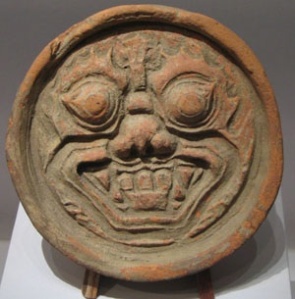 To understand the origin and evolution of the Oni cultural figure in Japan, see Oni and their Maces: Images of Oni from Onmyodo and Medieval Traditions.

Visit Kawara Museum of the City of Takahama, in Aichi prefecture — the only art museum in the world that specializes in the theme of roof tiles, and just outside the museum, the one-and-a-half-mile goblin trail or “Oni-no-michi” which is dotted with various examples of scowling onigawara. “Kawara” is translated as “roof tile.”

Examine the unmatched kawara tile display in Kawara Museum. Located in Takahama City, which, together with neighbouring Hekinan, has been a major centre of roof-tile (kawara) production for centuries and remains the main producer of Sanshu-kawara with Japan’s top domestic output of kawara.

At the Kawara museum you can obtain an up-close look at the best of the region’s roof tiles, feel the beauty and appeal of kawara through the outstanding collection and exhibits of pottery products including kawara from different periods and pottery-producing regions across Japan, as well as kawara/pottery from around the world.

Visitors can also experience the joy of hands-on pottery-making by kneading clay at the half-day workshop.

To view a stunning collection of onigawara, go to the online Flicker gallery of onigawara photos, and click here.