Advent of Agriculture and the Rice Revolution 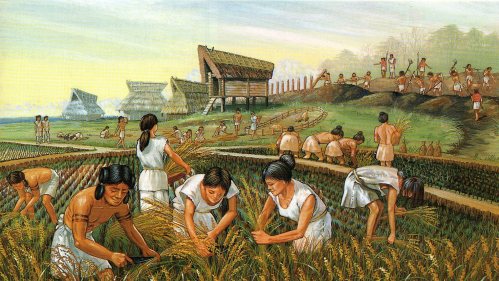 Wet rice farming was introduced around 400 B.C. and agricultural farming began to take hold as a way of life in Japan.

Rice is a highly nutritious food and can be grown to feed and sustain a large population. It allowed for a stable settled lifestyle instead of a nomadic hunter-gatherer one.

Rice farming technology also changed the way people did things, the way they lived and even changed social relationships for the people living in the Yayoi society. Rice grains and dry swidden rice field sites have been excavated in Kyushu dating to an earlier time around 1,000 B.C.  But it is thought that at the time rice farming made no impact on Jomon culture nor did it affect the economic foundation of society. It wasn’t until half a century later when wet-rice farming techniques and agricultural tools appeared on the scene, that rice farming is considered to have been introduced on a full scale in Yayoi Japan.

Around that time, migrants entered Japan in large numbers and brought with them crops and farming technology along with bronze and iron tools and objects.

Rice is thought to have originated from Hemudu and Pengtoushan area of China between 7,000 to 8,000 years ago. So why did it take around 5,000 years for rice agriculture to diffuse or spread to Japan?

Archaeologists and historians believe that the time-lag in taking up rice farming for Japan was due to the roundabout route that rice took to arrive along with migrants into Japan. Rice was thought to have originated from Changjiang and brought to the Korean peninsula, then via the Korea-Tsushima strait into Northern Kyushu. There are two other possible routes over which migrants may have taken the rice to Japan (from southern China through the Ryukyu islands too southern Kyushu; or directly from Chanjiang to northern Kyushu) but most experts are currently agreed that archaeological evidence supports only the Korean route.

Along with rice grains, Korean-style pottery, pit-dwellings, storage pits and stone tools similar to those found in Korea (see stone reapers (below left) and shell harvesters (below right)), also appeared in Japan around the 400-500 B.C. date. 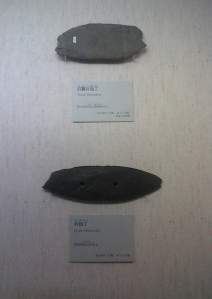 Another fact.   Rice found in southern China (the original source) was of two kinds: long and slender grained, as well as short and fat grained. In Yayoi Japan however, only the short grained type of rice is found. Because rice is a subtropical plant used to being grown in warmer climates, it took time for rice to be adapted to the cooler climates of northern China, Korean peninsula and to Kyushu which was wet and cool during Yayoi times. As rice traveled with migrating tribes, the long and thin grained variety was discarded along the way, because short grained rice proved to be better suited to growing conditions in Korea and Japan.

The earliest rice fields of Yayoi Japan ever discovered were in northern Kyushu at the Nabutake site in Saga prefecture, and in Fukuoka prefecture, at the Itatsuke and Notame sites. But the one excavated site that captivated everyone’s interest was at Toro in Shizuoka prefecture. Buried by a flood, the Toro rice farming village was preserved in particularly excellent condition.

Although it had taken rice agriculture 5,000 years to take hold in Japan, once it did, rice farming as a way of life took less than 300 years to spread northwards and eastwards right across Honshu island all the way to the northern tip.  Rice was cultivated in northern Tohoku before the Yayoi period came to an end.

One response to “Advent of Agriculture and the Rice Revolution”