The Nara Period is also called the Tempyo Period, a time when Buddhism as the ritsuryo state religion influenced Japan in all its spheres, politically and culturally. It was a very active period in which many missions and students were sent to Tang Dynasty China. The students who returned from China played important roles in the Japanese government.

With the building of many state sponsored temple complexes not only in the capital but in outlying provinces, the period is known for the many Buddhism-inspired arts. At the centre of the Emperor Shomu’s conceived Buddhist universe was Todai-ji Temple and within the temple lay the Vairocana Buddha (Daibutsu) and its treasure house, the Shoso-in. 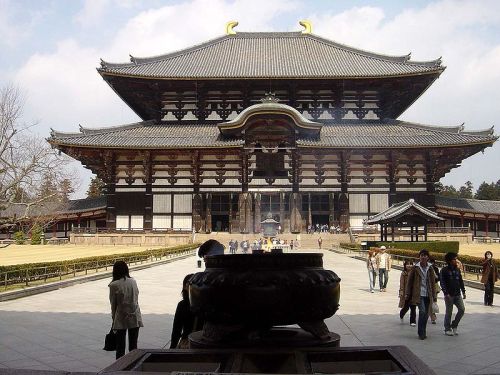 The Shoso-in Repository possesses many different musical instruments, ceramics and decorative works that  not only show the Buddhist influences but also the cosmopolitan influences of the times. Many of the  collected pieces were actually from China, India and the Middle  East during the Tempyo (Nara) Period.

The Tempyo or Nara Period is the Golden Age of sculpture, with the sculptures of the Nara period regarded as the finest examples of the medium in Japan.

The wooden statue of Miroku Bosatsu (below), one of the treasures of Koryu-ji Temple, is regarded as an outstanding example of beauty and purity in Japanese art. 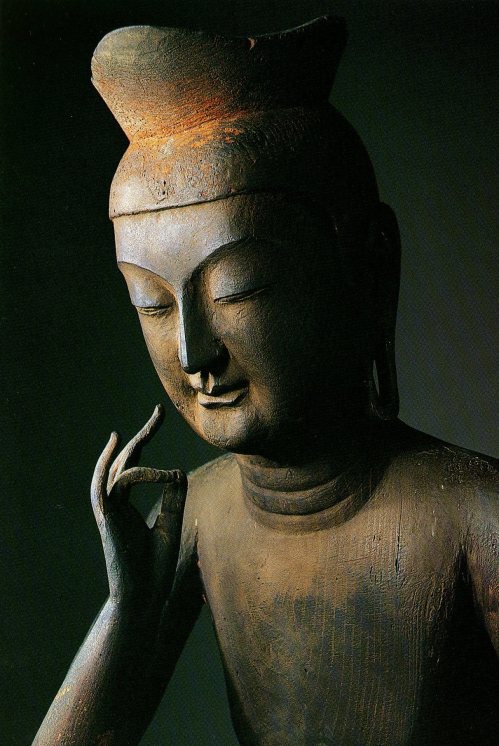 The Miroku Bosatsu is also kown as the “Buddha of the future”, the new saviour” who would lead people on the road to Enlightenment.

In the field of literature, from the Tempyo Period is passed down the legacy of Japan’s first historical literary works the Kojiki and Nihon shoki. These were historical works that also interwove collected myths of ancient Japan into the representations of the history of the founding of the mythical age of the gods to the Yamato state centred around the lives of the emperors. As a result of the political intention to strengthen the imperial system during Emperor Shomu’s day, the accounts surrounding those early Kofun-Yamato years are a combination of legends, mythology, some fabricated or distorted events as well as actual facts based on earlier historical texts now lost to modern-day Japan.  Accounts from the 7th century onwards are regarded as fairly reliable.

The other significant Tempyo published literature was the Manyoshu (The Collection of Myriad Leaves), a collection of poetry written between the Yamato and Tempyo periods. The earliest fragments of poetry from the Manyoshu date back to the Asuka Period.

The Tempyo Period ended when Emperor Kammu moved the imperial capital back to Nagaoka in the suburbs of Kyoto in 784.