Around 300 B.C., important cultural changes began sweeping through the Japanese islands. Waves of immigrants arrived in larger numbers than ever before from the mainland Asian continent.

With them, they brought new technology, bronze and iron-making skills, as well as rice-growing agricultural skills. These important innovations made their permanent mark on society in the archipelago…and the Iron Age had arrived in Japan.

The Yayoi people and culture, are named after the Yayoi district, a northern section of the University of Tokyo campus where the first pot, a distinctive type of pottery belonging to the Yayoi people, was found. 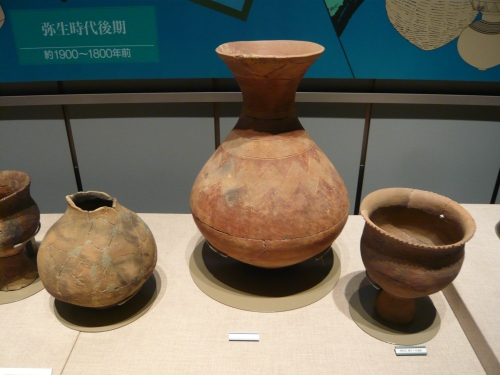 We do not know what the Yayoi people called themselves because they did not have writing, but we do know that the Chinese of the Former and Later Han dynasties of China called them “the people of Wa”.

The Yayoi people were taller, lighter built and had slenderer faces than the Jomon inhabitants who had occupied the Japanese islands before them.

The Yayoi culture established itself, first in the south — in northern Kyushu, spreading quickly northeastwards along the Sannin coast and as far as the Kanto plain.

Archaeologists have uncovered many artefacts, remains and other evidence of the Yayoi culture. We can learn a great deal about life during the Yayoi period by examining and exploring some of these trails leading back to Yayoi times including: Yayoi pottery; remains of Yayoi architecture and settlements; iron and bronze weapons; bronze bells, bronze mirrors and coins; iron-tipped and other farming tools; carbonized rice and pollen remains and the remains of the rice fields; graves with new prestigious goods.

Chinese written documents are another important source historians look to — the Han Shu (History of Han) and the Wei Chih (History of Wei) depict the world and customs of the tribal society of the Yayoi people. They tell of the Yamatai kingdom and a shamanness queen called Himiko(A.D. 187 to 248) who ruled over one hundred tribal chiefdoms

The Yayoi culture did not, however, wipe out the Jomon people or their old ways. In many places, the Yayoi people lived side by side with Jomon inhabitants and the Jomon culture remained strong in the south and in northern Japan the “Continuing Jomon phase” continued till around the 8th century or so.  Tooth extraction custom did not disappear until the end of the Yayoi period.