A 2017 study of ancient DNA of eight Mogou (Di-Qiang) throws light on the composition and evolutionary tree of 02 and 03 lineages in East Asia, including the branches and twigs that lead to lineages in Japan: 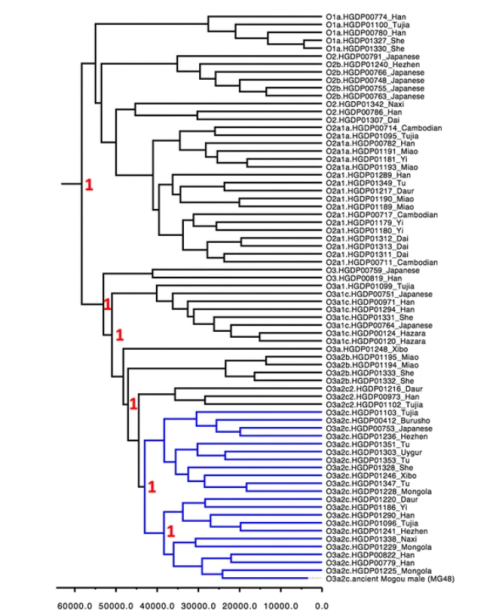 The Mogou site is located in the Tibetan Autonomous Prefecture of Gannan, Gansu Province, being at the geographical center of China and upstream of the Yellow river.

Y-DNA: All of six Mogou males whose Y-DNA could be captured belonged to Y-DNA haplogroup O3a2/P201 (two male specimen’s Y-DNA haplogroups were identified to be O3a2c and O3a2c1a/M117)

From the phylogenetic tree, Japanese 02b branch is closest to the Hezhen branch(see also a study on Devil’s Gate, Hezhen and Japanese populations), while the 03a2 haplogroup has branched off from an early northern Han branch which in turn had branched off from the 02 and 03 that had then split into the Han, Mongolic and Di-Qiang Mogou groups.

Wang et al., reported “data from Jomon hunter-gatherers from Japan who harbored one of the earliest splitting branches of East Eurasian variation, and show an affinity among Jomon, Amur River Basin, ancient Taiwan, and Austronesian-speakers, as expected for ancestry if they all had contributions from a Late Pleistocene coastal route migration to East Asia.”