4th century: The Legend of Prince Yamatotakeru: the path he took and Yamato’s expansion

Japan’s first two official history books, the Kojiki(completed in AD 712) and Nihon Shoki(completed in AD 720) chronicled the legend and life of Prince Yamatotakeru, who historians think is possibly based on a true character who lived around the 4th century. According to the chronicles, he was son of King Keiko, who by tradition is regarded as the 12th Emperor of Japan (Tenno). Historians today tend to discount events up to the 5th century as fictional or partially fictional accounts that were inserted to provide an unbroken imperial line of ancestors leading to the kami or divine gods.

The story details of the legendary character are however studied as historians think that the route the prince took reflects the true locations of the day as Yamato court battled to control and expand its territory at the dawning of the Japanese nation.

Interaction of legend and archaeology

The prince’s path of territorial domination is thought to mirror the archaeological evidence of the patterns of shrines and burial tombs of the Yamato period. The famous sword that Susa no O no Mikoto used to kill the legendary eight-headed serpent was recorded by the Nihon shoki as having been deposited at the shrine of Isonokami. 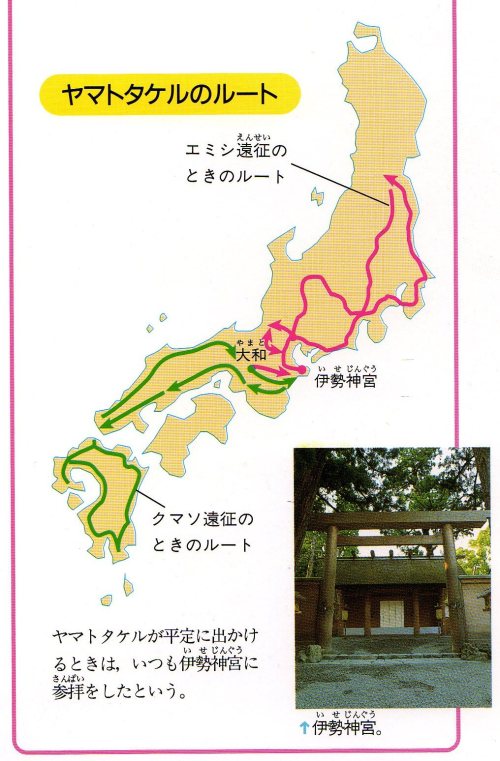 The sacred sword in question is thought to be an existing seven-pronged sword (shichishito), which is a genuine archaeological artefact dated by the gold inlaid inscription to 369, that had been presented to a Yamato king and placed in the safekeeping of Isonokami storehouse. In 1873, the chief priest of Isonokami had examined and made the connection between the similarity of the inscribed wording on the sword with the ones mentioned in the Nihon shoki report.

THE LEGEND OF PRINCE YAMATOTAKERU

As the legend goes, Prince Yamato who was at first known as Prince Ousu had slain his elder brother. His grieving father King Keiko, fearing the evil nature of his son, sent Prince Ousu to Izumo Province (eastern Shimane Prefecture) and then to the land of Kumaso (Kumamoto Prefecture) to battle brigands and rebels.

Before Prince Yamato prayed at the shrines of Ise asking the blessing of Amaterasu, the Sun Goddess for her blessings on his ventures. Prince Yamato’s aunt who was high priestess of the Ise shrines, presented him with a rich silk robe, saying it would be of good luck to him. Then the prince left the palace on his journey taking his wife Princess Ototachibana and a number of loyal followers. He proceeded to the southern Island of Kyushu which was infested with brigands and bandits.

While King Keiko had hoped the prince would fail in his quest, Prince Ousu showed great wile and cunning defeating his enemies one after the other.

During one episode of his adventures, Prince Yamato donned the rich silk robe his aunt had given him, let down his hair, stuck a comb and decked himself with jewels.  He had disguised himself as a woman, and thus appareled he entered his enemies’ tent during a banquet where Kumaso and his brother Takeru were feasting and drinking. Kumaso beckoned to the prince disguised as a fair serving woman, bidding him to serve wine as quickly as possible. When Kumaso had become drunk, the prince stabbed the two Kumaso warrior brothers to death. As the brother of Kumaso lay dying, he demanded to know who the prince really was, and the brigand then bestowed upon the prince the title Yamato Takeru, meaning “The Bravest of Yamato”.

Despite his victories, King Keiko remained resolute in his view of his son. He ordered Prince Yamato Takeru (as he was now called) to the rebel provinces, the eastern land whose people disobeyed the imperial court.

When Prince Yamato Takeru was on his way back to the capital, he encounted another outlaw named Idzumo Takeru. He befriended the outlaw, and invited Takeru to go swimming with him in the river Hinokawa. While the brigand was swimming down-stream the Prince secretly replaced the brigand’s sword with a fake wooden sword. When Takeru came out of the water, the Prince challenged him to a duel to prove who was the better swordsman of the two, and while Takeru fumbled and struggled with his fake wooden sword, Prince Yamato Takeru killed the outlaw. He then returned to the palace where he was feasted and bestowed many gifts by the King his father.

The King soon ordered his son to go and quell the Emishi uprising in the eastern provinces. Before he left, he was given a spear made from a holly tree called the “Eight-Arms-Length-Spear”. The prince, as before, went to pray for success at the Ise shrines. His aunt, this time, presented him with a sword and a bag containing flints. The sacred sword named Kusanagi no tsurugi had once belonged to the gods, having been discovered by Susano Mikoto, the brother of Sun goddess Amaterasu. (The sword was used by Susano to slay the great eight-headed serpent that had terrorized the locals was deposited at the shrine of Isonokami.)

When Prince Yamato Takeru was in the province of Suruga, he had been invited to a deer-hunt and while engaged in the deer hunt on a great and wild plain covered with huge grass, he became conscious of a bush fire. Flames and smoke were fast upon him and beginning to close off his route of escape. The Prince realized that he had walked into a trap!  Then, the Prince, aided by his sacred sword Kusanagi, opened the bag his aunt had given him, using the flints, set fire to the grass nearest him, and with the sword Kusanagi began cutting through tall green blades on the either side as quickly as possible. As he did so, the wind suddenly changed and blew the flames away from him, so that the Prince was able to escape the burning inferno that had been the work of the Emishi warring tribesmen (ancestors of the Ainu). That was how the sword came to be dubbed the “Grass-Cleaving Sword”.

After having obeyed his father’s command in quelling the Emishi uprising, Prince Yamato Takeru headed further east. There he scored many victories against his enemies but he lost his wife Ototachibanahime. During a violent storm, the princess threw herself into the sea as a sacrifice to placate the wrath of the sea god.

Next, Prince Yamato Takeru passed through the province of Owari until he came to the province of Omi which was terrorized by a great serpent that descended the mountain every day, entering the villages and eating many of its human occupants. Prince Yamato Takeru climbed up the Mount Ibaki seeking to find the serpent and when he found it, he slaughtered the serpent by twisting his bare arms about it. No sooner had he done so, darkness and heavy rains fell. When the Prince had descended the mountain, he found that his feet burned with a strange pain and he felt terribly ill. The serpent had stung the Prince, but fortunately, the Prince regained his health.

While still in the east, together with an old sage from those parts, Prince Yamato Takeru also composed the first renga poem in Kai Province in which Mount Tsukuba (in Ibaraki Prefecture) featured as a central theme.

Despite Prince Yamato Takeru’s great victories, he finally came to an early demise through disease, supposedly cursed by a local god of Mount Ibuki (located at the border of Omi Province and Mino Province) for having earlier blasphemed the god.

With that tragic death, his adventures ended on the Plains of Tagi, where he turned into a white plover before vanishing from the world of the living.

Prince Yamato Takeru is today revered as a folk hero for his courage and ingenuity. He is said to be entombed in the Mausoleum of the White Plover.

One response to “4th century: The Legend of Prince Yamatotakeru: the path he took and Yamato’s expansion”