Who are the Okhotsk people?

The Okhotsk culture:  who were the Okhotsk people who are hypothesized to have merged with the Hokkaido Jomon and Satsumon to form the Ainu people? 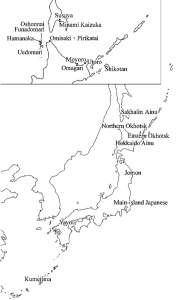 In previous morphological studies, Mitsuhashi and Yamaguchi (1961) reported that skeletons of the Okhotsk people had morphological characteristics similar to those of northeastern Asian people. In addition, Yamaguchi(1974) and Ishida (1988, 1996) reported, based on cranial measurements, that the Okhotsk people were closer to populations that are currently distributed downstream of the Amur River. Moreover, Utagawa (2002) reported that evidence for the occurrence of bear-sending ceremonies, as seen in the Ainu culture, was found from archaeological sites of the Okhotsk culture. Rituals using brown bears are thought to be one proto-type of ‘‘Iomante,’’ which has been performed as a bear-sending ceremony in the Ainu culture. Therefore, archaeologists have generally assumed that the Okhotsk culture joined the Satsumon culture (eighth to fourteenth centuries; direct descendants of the Jomon people in Hokkaido) resulting in establishment of the Ainu culture. The direction of gene flow obtained in the present study is in agreement with the interpretation based on previous morphological and archaeological data. These facts demonstrate that the Okhotsk people could have originated from northeastern Asian populations such as the Nivkhi and Ulchi currently living around Sakhalin and downstream of the Amur River, and support the hypothesis that the Okhotsk people could have joined the Satsumon people resulting in the Ainu culture.

Kikuchi (2004) reported that walrus tusks excavated from archaeological sites of the Okhotsk culture could have been brought from the ancient Koryak culture to the Okhotsk culture, because walrus are currently distributed in the Arctic sea and the Bering sea. In the present study, the Okhotsk people were found to have some genetic affinities with the Koryak and the Even living around the Kamchatka peninsula (Table 2; Fig. 3). These facts suggest that there were genetic and cultural exchanges between the Okhotsk people and the Koryak and Even.

In conclusion, the present study has provided new status of the Okhotsk people. Unique maternal genetic features of the Okhotsk people identified by ancient mtDNA analysis demonstrated their genetic differentiation and some genetic affinity with geographically neighboring modern populations such as the Nivkihi and Ulchi. The molecular phylogenetic data of the present study support the previous anthropological discussion based on morphological and archaeological data.

Nearby Hokkaido, on the Kamchatka peninsula are possible sources of  Mtdna has G, Y ( and Z).

In this study, we analyzed the mitochondrial DNA (mtDNA) variation in 202 individuals representing one Itel’men and three Koryak populations from different parts of the Kamchatka peninsula. All mtDNAs were subjected to high resolution restriction (RFLP) analysis and control region (CR) sequencing, and the resulting data were combined with those available for other Siberian and east Asian populations and subjected to statistical and phylogenetic analysis. Together, the Koryaks and Itel’men were found to have mtDNAs belonging to three (A, C, and D) of the four major haplotype groups (haplogroups) observed in Siberian and Native American populations (A-D). In addition, they exhibited mtDNAs belonging to haplogroups G, Y, and Z, which were formerly called “Other” mtDNAs. While Kamchatka harbored the highest frequencies of haplogroup G mtDNAs, which were widely distributed in eastern Siberian and adjacent east Asian populations, the distribution of haplogroup Y was restricted within a relatively small area and pointed to the lower Amur River-Sakhalin Island region as its place of origin. In contrast, the pattern ofdistribution and the origin of haplogroup Z mtDNAs remained unclear. Furthermore, phylogenetic and statistical analyses showed that Koryaks and Itel’men had stronger genetic affinities with eastern Siberian/east Asian populations than to those of the north Pacific Rim. These results were consistent with colonization events associated with the relatively recent immigration to Kamchatka of new tribes from the Siberian mainland region, although remnants of ancient Beringian populations were still evident in the Koryak and Itel’men gene pools.

To find out why the Okhotsk culture disappeared, read also

End of Okhotsk?: A Peer Polity Interaction approach to the interaction, exchange and decline of a Northeast-Asian maritime culture on Hokkaido, Japan, by Joran Smale