Zuto in Nara, with Doto in Sakai and Kumayama stone monument in Okayama are classified as special stupas of the Nara Age. They were constructed as stepped pyramids with an emphasis on a horizontal orientation. And these stupas, without internal space,are very different from the common Japanese stupa. Such a condition certainly has a close connection with Buddhism, because there are many relief Buddha images at Zuto.

The stupa, born in India in the 3rd century B.C., became general object of worship for Buddhists before the formation of Buddha imagery. Sanchi stupa, the oldest, is shaped like a half sphere and built to allow worship around it. The functions of Buddhist stupas were also diffused, and shapes show a variety of styles in each cultural area.

Borobudur, in Central Java, Indonesia, is called the biggest Buddhist monument in the world, and was built during over a half century by the Sailendra Dynasty after Mahayana Buddhism was introduced from the Srivijaya Kingdom of South Sumatra in the early half of the 8th century AD. Many Buddhism images and reliefs in Borobudur were made referencing Gandavyuha and Vajrayana/Esoteric Buddhism from Sri Lanka and East India.

However, a stepped pyramid shape without an inner space as found at Borobudur is found in neither India nor Sri Lanka. And there are no stupas with that similar shape in Southeast Asia prior to Borobudur. Similar shaped monuments are found only in South Sumatra etc. This type of monument, originating from the mountain religions of Megalithic culture that predated the introduction of Buddhism continued through the Historical Age. Borobudur can be seen as a massive monument of this origin, decorated in Buddhism style.

The formation of the Huayen Tsung/Gandavyuha religion in the Tang Dynasty was accomplished due to the large role of ljing, who stayed for a long time in Srivijaya while traveling to India by the sea route of Southeast Asia. The establishment of Vajrayana in the Tang was achieved largely by Vajrabodlxi and Amoghavajra, who came by way of Southeast Asia. Because of this, it can be thought that it was Indonesian local mountain religion, mixed into Huayen Tsung and Vajrayana, that developed into the Buddhism of Nara.

It is for this reason that both Borobudur and Zuto etc. are shaped in the form of a stepped pyramid. This is an interesting demonstration of archaeology showing the diffusion of Buddhism as a contact among long distance cultures.

A mound of earth that 1,300 years ago looked like the pyramid pictured was restored to its original shape and unveiled Friday after a five-year restoration project in Sakai, Osaka Prefecture. The earthen pyramid called Doto is a kind of Buddhist stupa, where relics of Buddha are supposedly stored. The original structure is believed to have been built on the orders of the priest Gyoki (668-749) and is designated as a historic site. It is thought to stand on the site of the Onodera temple, which was built by Gyoki in 727. The new structure measures 53.1 meters on each side and stands 8.6 meters. It is adorned with 50,000 reddish-brown tiles. A similar pyramid stupa, called Zuto, stands in Nara, but its base measurements are 20 meters shorter. The Sakai pyramid is the largest earthwork stupa in Japan, according to a local cultural assets official. It had been reduced to a mere “heap of earth” before the city conducted a survey from fiscal 1998 to 2003 and started restoration work in fiscal 2004.
Source: (IHT/Asahi: March 28,2009)

Report of Archaeological Investigations into the Zuto Stupa of Nara Japan, Research Reports of the Nara National Cultural Properties Research Institute, no. 62. The report attributes the style of the Doto pyramid to a Southern Asian (Chinese) origin.

Borobudur Temple Compound (UNESCO World Heritage site) is a stepped pyramid, made from over one and a half million blocks of stone. Built built between AD 750 and 842, it was conceived of in three mounting tiers around a hill (its natural centre): a pyramidal base with five concentric square terraces, the trunk of a cone with three circular platforms and, at the top, a monumental stupa. A harmonious marriage of stupas, temple-mountain and the ritual diagram, this temple complex was built on several levels around a hill which forms a natural centre. The first level above the base comprises five square terraces, graduated in size and forming the base of a pyramid. Above this level are three concentric circular platforms crowned by the main stupa. (Watch NHK video)

Zuto is a 8th-century Mahayana Buddhist monument in Nara-city. The monument comprises seven square platforms, reaches a height of 10  metres and is decorated with 22 relief panels. 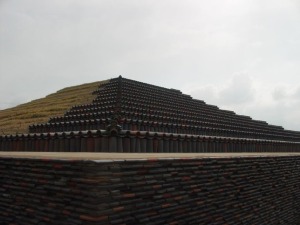 The Doto earthen “pagoda”-pyramid. It is said that the priest Gyoki was originally built it as Buddhist stupa monument, in Ono temple (near Kobe city) during the Nara period. Photo: Virtual Tourist

Stupa (Wikipedia) The stupa is the oldest Buddhist religious monument and was originally only a simple mound of mud or clay to cover relics of Buddha. In the third century CE, after his conversion to Buddhism, the emperor Asoka had the original stupas opened and the remains distributed among the several thousand stupas he had built. Nevertheless, the stupas at the eight places associated with the life of the Buddha continued to be of particular importance. Accordingly, the importance of a stupa changed from being a funerary monument to being an object of veneration. As a consequence their appearance changed also. All stupas contain a treasury filled with various objects.  Jewellery and other “precious” objects are also placed in the treasury. It is not necessary that the jewellery be expensive, since it is the symbolic value that is important, not the market price. It is believed that the more objects placed into the stupa, the stronger the energy of the Stupa will be. A very important element in every Stupa is the Tree of Life. It is a wooden pole covered with gems and thousands of mantras, and placed in the central channel of the stupa. It is placed here during a ceremony or initiation, where the participants hold colorful ribbons connected to the Tree of Life. Together the participants make their most positive and powerful wishes, which are stored in the Tree of Life. In this way the stupa is charged up, and will start to function.

“Stupa is a Sanskrit word that literally means “to heap” or “to pile up.” Some scholars believe that stupas predated Buddhism and originally were mounds of dirt or rocks built to honor dead kings. Later, they say, the Buddha imbued them with spiritual meaning. This explanation runs counter to Buddhist tradition, which maintains that because the stupa conveys enlightened qualities, it could only have been revealed by the mind of enlightenment. …In fact, some stupas, such as the Swayambhunath Stupa in Nepal, are believed to be self-arising expressions of enlightenment.”