In the news: Ancient horse trappings dug up at burial mound 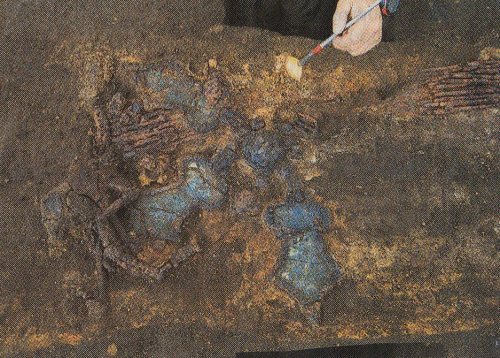 A set of ornamental horse trappings dating back to the early sixth century has been excavated at a burial mound in Ota Ward, Tokyo, according to researchers.

It marked the second discovery of a set of ancient horse articles in Tokyo, following that at Kamezuka burial mound in Komae in the 1950s. Experts said it was rare for ancient trappings to be found in such good condition.

The trappings, discovered at Tsutsumikata Gongendai burial mound, were mostly designed to decorate a horse’s rump.

A group of researchers headed by Hideichi Sakazume, professor emeritus of Rissho University, uncovered the uzu, a circular ornament hung at the top of the horses’ tail; three 20-centimeter-long, 12-centimeter-wide kyoyo swordlike ornaments hung from the uzu; and three metal fittings. In addition to the set of tail ornaments, the researchers found other items, including a bit.

The trappings were discovered in a four-meter-long wooden coffin, according to the researchers.

Hatsushige Otsuka, professor emeritus of Meiji University, said the discovery provided researchers with precious materials to learn about burial mounds built in the southern part of Musashi Province, which straddles Tokyo and Saitama and Kanagawa prefectures.

“I find it quite interesting that the trappings were placed to make it look as if they were actually decorating a horse,” Otsuka said.

One response to “In the news: Ancient horse trappings dug up at burial mound”