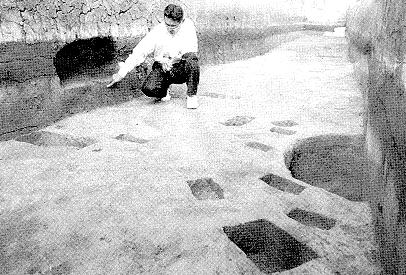 A RESEARCHER points to the remains of a cooking hearth in the Tachikiri Ruins on Tanegashima Island, Kagoshima Prefecture KYODO PHOTO

KAGOSHIMA (Kyodo) The remains of a settlement believed to be the oldest in Japan have been found on Tanegashima Island in Kagoshima Prefecture, undermining the established theory that Paleolithic age dwellers were migrant hunters, according to the local education board.
The settlement, found in the Tachikiri Ruins in the town of Nakatane, is believed to date back 30,900 years. Up until about 15,000 years ago, Tanegashima Island was connected with Kyushu.
The board has been surveying the ruins, which extend over more than 930 sq. meters since last month.
Officials have found the remains of about 50 stone implements believed to have been used to crush nuts, the board said.
They also discovered two collections of stones believed to have been used for kitchen ranges, six holes filled with ash, apparently once furnaces, and other holes believed to have been used for storage or to hold pillars, it said.
The ash was about 15 cm deep, suggesting prolonged habitation at the site, experts said.
“This is Japan’s oldest ruins with processing tools cooking facilities and other remains,” said Michio Okamura, an expert on the Paleolithic era at the Agency for Cultural Affairs.
“This is a major discovery that can alter our views about the Paleolithic age, which has so far been believed to have been characterized by hunting-oriented migration,” he said.
Tsuyoshi Fujimoto, a professor at Niigata University, said Kagoshima is an area where the habit of eating plants started at a very early date, even on a global time scale.
The new find could help support the theory that Paleolithic people in East Asia led a life that relied more on plants for sustenance than in other parts of the world, he said.
Only a few sites dating from the Paleolithic age have been unearthed in Japan, and the Tachikiri Ruins is the oldest by more than 10,000 years.

Late Pleistocene to Early Holocene Plant Movements in Southern Kyushu, Japan by Ayako SHIBUTANI  Southern Japan was covered in cool temperate forest during the LGM. Evidence of human plant utilization strategy was found in the form of the earlier appearance of grinding stone tools recovered together with starch residues on them (fifteen stones from four sites in southern Kyushu, including Tachikiri (32,000 years bp)