A-hunting we will go!

The Jomon people hunted animals like deer and wild boar most intensely in the winter months with bow and arrow when plant food and shellfish became scarce. They reared and used dogs to help them on their hunting trips

At other times of the year, hunting was only a side activity and meat played a lesser role in their diet when compared with other foods.

Their key hunting targets were larger mammals like deer (Cervus nippon), wild boar (Sus scrofa leuco-myotack) and occasionally bear for food. The Jomon hunters made thousands of deep, narrow pit traps for catching boars in open terrain or cast nets along game trails to catch the deer. In Hokkaido alone, only deer traps were set since wild boar did not live in Hokkaido. Sometimes they dropped rocks from trees onto animals passing below. 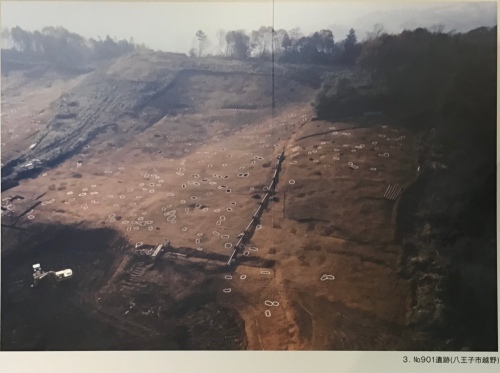 The Jomon people spent much time and effort making many deep, narrow pit traps for trapping animals. Over 10,000 pit traps (see photo above) were found by archaeologists made by the Earliest Jomon settlements in the Tama Hills region outside of Tokyo.  They must have been careful to memorize the locations of these pit traps so they could return year after year to the same spot. Fewer pit-traps were made the rest of the Jomon period. Pit traps are usually laid out in a linear fashion.  They made fences and posts, then with the help of their dogs, they drove their wild prey into the gaps between them.

Between deer and boars, the Jomon hunters preferred wild boar to deer, which were more abundantly available than the boar. Their hunting focused on younger and older animals…those of middle age were rarely taken. More boar and deer were hunted during the winter season which is when larger herds of animals are seen.

A hunting expedition was an exciting and prestigious event. The best hunters who brought home the prized catches were honored and special ceremonies were celebrated in a big way in their villages after the big hunting season was done.