Nara period religion: A vision of the Pure Land as seen in the Taima Mandala

The work is called the Taima Mandala because the original version in Japan had been handed down at Taima-dera 当麻寺, Nara. The Mandala of Taima is one of the Three Joudo Mandalas *joudo sanmandara 浄土三曼荼羅, revered by followers of Pure Land Buddhism.

It is a religious image usually hung to the left of the main altar in the sanctuary of a Pure Land joudo 浄土 temple. The pictorialization was based on a commentary on the Buddhist sutra by Shandao 善導 (613-681). 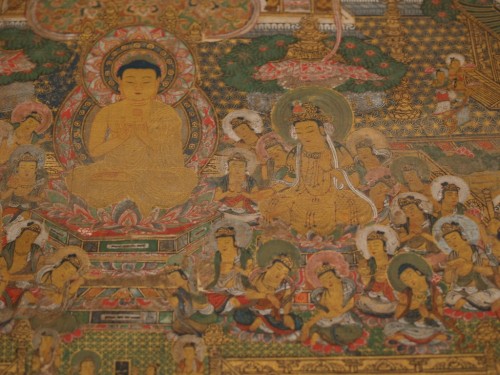 As with the *Amida joudo hensou 阿弥陀浄土変相, the painting subject (magnified above) focuses on an Amida triad, *Amida sanzon 阿弥陀三尊, Amida surrounded by bodhisattvas, *bosatsu菩薩.

In addition, the left vertical pannel or court shows the story of Prince Ajatasatru (Jp: Ajase Taishi 阿闍世太子) from the preface of the sutra.

In the right vertical and lower horizontal courts the story is continued with additional depictions of the Sixteen Contemplations juurokukan 十六観 that *Shaka 釈迦 preached to the king’s wife as a guide to visualize Amida‘s paradise.

Thirteen Contemplations are arranged on the right side and the remaining three contemplations, commonly referred to as the Nine Stages of Rebirth *kubon raigou 九品来迎 or kubon oujou 九品往生, are placed in the bottom court.

Chinese origin of the Taima Mandala

Scholars believe that the original Taima mandara was a large-scale embroidery imported from Tang China. It is believed that in 763 during the Nara period Chuujou Hime 中将姫 had it woven with lotus threads guushi 藕糸 based on a vision she had experienced. Thus the original woven work is sometimes also called the Guushi mandara 藕糸曼荼羅.

The miraculous weaving of the 4.5 meters square tsuzure-ori 綴織, usually translated as “figured (hand woven) brocade”, is said to have been accomplished by a nun who was believed to be a human incarnation of the bodhisattva *Kannon 観音, the main attendant to Amida. This 8c work is still preserved today at Taimadera in fragments with a great many Kamakura period repairs.

From the Heian period (10c), with the increasing popularity of Pure Land beliefs, the work grew ever more revered.

In the Kamakura period *Hounen‘s 法然 (1133-1212) disciple Shoukuu 証空 (1177-1247), founder of the Seizan 西山 branch of the Joudo sect, actively propagated the teachings of the Taima mandala. Hence, at this time numerous commentaries on the iconography were written and many copies of various sizes were also painted. The most notable was the well known work from 1217 preserved in Zenrinji 禅林寺, Kyoto which is regarded as the closest extant copy. Numerous later copies also exist. Moreover, the illustrated scrolls of the “Legends of the Taima Mandala” Taima mandara engi emaki 当麻曼荼羅縁起絵巻 (Koumyouji 光明寺, 13c), with its vivid illustrations and text of the mandala’s miraculous origins, played an important role in the diffusion of Taima mandala beliefs.

According to tradition, Chujo no Tsubone, the daughter of a nobleman Yokohagino Dainagon, lost her mother, and so aspired to the Pure Land where she should have been born. She was said to have copied one thousand volumes on Pure Land Buddhism and offered them to Taimadera Temple, before becoming a nun. In 763 she became a nun at the Taima-dera, Nara Prefecture, and received the Dharma name Honyo (“Dharma-suchness”). Wishing to see the Amida, she began a seven-day meditation on him. On the sixth day a nun appeared and instructed Honyo to gather a hundred horseloads of lotus-stems. When this was done in three days with the help of her father, the nun appeared again and span the lotus fibers into thread. When she had dyed the threads in the five Buddhist colors, another nun appeared and wove them into a Pure Land mandala overnight. Honyo was greatly rejoiced to see this, and asked their names. The first nun said that she was an incarnation of Amida and the second nun, Kannon (Avalokiteshvara). Since then, Honyo diligently contemplated this mandala, and successfully attained birth in the Pure Land in 775.

The Taimadera Mandala and the model of the Pure Land depicted in it would continue to inspire through the centuries and form one of the most enduring beliefs of the Japanese people.  Later Pure Land scrolls however, depicted people in Heian dress (see Taima Mandara Engi).

After the 13th century, the mandala became popular when Shoku (1177-1247), a disciple of Honen and the founder of the Seizan school of the Jodo sect, visited Taima-dera in 1229 at the request of its resident priest, Ken’a, and carefully examined the mandala. Deeply impressed by its grandeur and its precise presentation of the Contemplation Sutra in accordance with Shan-tao’s (613-681) commentaries, Shoku wrote a detailed commentary, entitled Taima-mandara-chuki, 10 fasc. He had a painter make copies of the mandala and donated them to various temples and Nembutsu centers. He also had wood-blocks of it carved, which he distributed in Japan and China.

Shoku’s commentary was followed by many others, including the extensive one by Shoso Yuyo (1366-1440), the eighth abbot of the Chinzei school of Jodo sect and the founder of the Zojoji temple in Tokyo. Copies of the mandala were widely used as “etoki” (explanation of the teaching by a picture) as well as objects of veneration.

Later in the Edo period (1603-1867), with the undiminished popularity of the Taima Mandala, more copies were made in various reduced sizes. These were called the Dokutan Mandala.

Based on the article “Taima mandara 当麻曼荼羅” of the  JAANUS database

What is Pure Land Buddhism?