Kassaka Tattooed Faces of the Jomon

One of the reasons why Jomon figurines capture the attention of historians and lay people alike, is that they portray what are believed to the earliest known representations of tattooed faces.

The earliest tattoo faced figurine is said to be dated to ca 5000 B.C. It is commonly called the Kassaka figurine as it was unearthed from the Kassaka site in Sagamihara city, Kanagawa prefecture, see below: 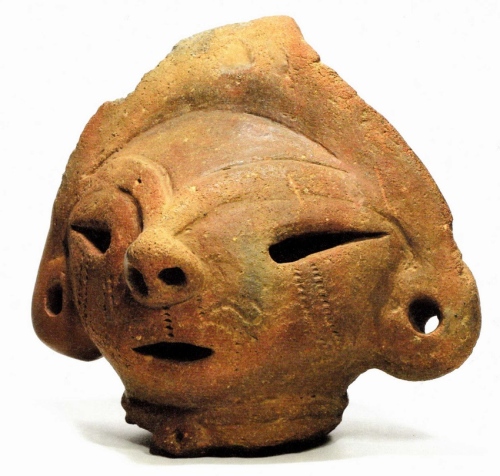 The above photo (photo credit: Harry’s blog)  of the Kassaka figurine is currently displayed at the Kanagawa Prefectural History Museum. (Harry’s blog article also mentions the other similar figurines unearthed from Kudencho, Yokohama city, Kanagawa.)
These tattooed faced figurines are now considered typical of Jomon ceramic figurines found in Kanagawa, they are called Kassaka Jomon as seen in the poster of a past exhibition by the Kanagawa Prefectural History Museum, you can see it displayed online at the museum’s webpage itself .

More Kassaka Jomon pieces have appeared according to the
Mainichi Shimbun May 20, 2017  report
The figurines are rather intriguing. as well as whimsical, sometimes appearing perched as ornaments on the edge of pots. Do they represent the spirit of a birthing deity or fire deity or both? Perhaps, hearkening back to the connected and very ancient idea of humans being formed from clay? 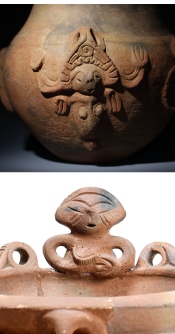