Japan’s first calendar came from China via Korea. It was a lunisolar calendrical system similar to the Chinese Xuanmingli  system that was in use in China until the Jiutangshu.

In the middle of the 6th century, the Yamato Imperial Court, which ruled Japan at the time, invited a priest from Paekche (Kudara in Japanese), to learn from him how to draw up a calendar, as well as astronomy and geography. Consequently, Japan organized its first calendar in the 12th year of Suiko (604) 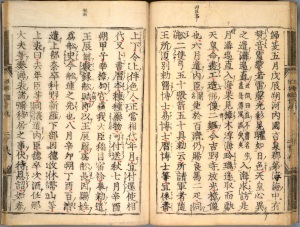 The calendar used then was called “Tai-in-taiyo-reki,” a lunisolar calendar, or “Onmyo-reki.”
Each month was adjusted to the cycle of moon’s waxing and waning. Since the moon orbits the earth in about 29.5 days, adjustment was required and this was done by making months with either 30 days or 29 days, the former, “Dai-no-tsuki (long month),” the latter, “Sho-no-tsuki (short month).” Aside from the moon’s orbit round the earth, the earth orbits the sun in 365.25 days, which, as we all know, causes the seasonal changes. Thus, merely repeating long and short months gradually produced a discrepancy between the actual season and the calendar. To compensate for this, a month called “Uru-zuki,” or intercalary month, was inserted every few years to produce a year with 13 months, with the order of longer and shorter months changing year by year.
Unlike our contemporary calendar in which there is no change in the order of months, back then the fixing of a calendar was deemed so important that it was placed under the control of the imperial court and, in the later Edo period, under the superimposed military shogunate regime.

The calendar established by Onmyo-ryo [Astronomy and Metereology Administration] was called “Guchu-reki,” one in which various words indicating seasons, annual events and daily good omens were written in Chinese characters and called “Reki-chu (calendar notes).”

The Guchu-reki derives its name from the fact that the notes were written in detail.
This Guchu-reki, which was in service until the Edo period, was used particularly by noblemen in ancient and medieval times, individuals who based their everyday activities on the calendar as a matter of course. They often wrote a personal diary in the blank spaces or on the back of their personal calendar. These entries remain left valuable historical records of the era.

The Guchureki 具注暦 was originally edited in the 11th month of the preceding year by the Astronomy and Meteorology Administration (On’you-ryou 陰陽寮 in Japanese), a branch of the Ministry of Home Affairs (Nakatsukasa-shou 中務省 in Japanese) of the Federal Government, and distributed to governers of prefectures and counties etc., as well as some main officers of local governments from the Ministry of Home Affairs.

It has been said that the oldest Guchureki in existence is that of the year 746 (Tenpyo 天平 reign period, 18th year), which is now in Shosoin 正倉院 in Nara.

However, the National Research Institute for Cultural Properties of Nara 奈良文 化財研究所 announced in 2003 that the oldest Guchureki of the year 689 (Jito 持統 reign period, 3rd year) was found in Asuka, Nara. Unfortunately, these calendars of Guchureki of the older years did not contain the data of sunrise and sunset or the daytime and nighttime durations.

The times of sunrise and sunset and the daytime and nighttime durations were written on particular fixed dates in Guchureki for the years after the calendar system called Xuanmingli 宣明暦 was officially introduced in Japan in the year 862.

Compilation of Engishiki started in AD 905 (Engi 延喜 reign period 5th year) and almost finished in 927. (Similar collections of administration laws and rules for 701-824 and for 824-877 were already compiled as Kouninshiki 弘仁式 and Jouganshiki 貞観式, respectively). Engishiki collected all of the administration laws and rules from the Taiho 大宝 reign period (701-703) to the Engi reign period (901-922) in separate parts for individual Ministries and Administrations. In the part of the Astronomy and Meteorology Administration, the times of sunrise and sunset, the times to open and close gates of the Palace and the closing hours of government office are given. Incidentally, the main members of this Administration were Doctors of Astronomy, System, Time Keeping etc. and the main work of this Administration was astronomical and meteorological observations, editings almanacs, time keeping etc.