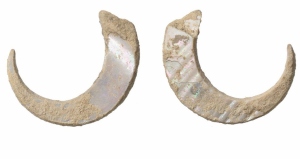 There’s no telling what kinds of fishermen’s tales they told, but the early modern humans who lived on tiny Okinawa Island between mainland Japan and Taiwan nearly 30,000 years ago are the world’s oldest known anglers. Now, archaeologists have discovered the oldest known fishhooks in a limestone cave in the island’s interior, dating back nearly 23,000 years. The fishhooks, all carved from shells, were found in Sakitari Cave, which was occupied seasonally by fishermen taking advantage of the downstream migrations of crabs and freshwater snails. Unlike their mainland counterparts, who fashioned tools and beads out of shells and stones, the ancient people of Okinawa Island used shells almost exclusively. Japanese archaeologists excavating the cave discovered both a finished and an unfinished fishhook that had been carved and ground from sea snail shells. By radiocarbon dating pieces of charcoal found in the same layer as the fishhooks, the researchers determined the hooks were between 22,380 and 22,770 years old. Accounting for margin of error, that gives them an edge over similar fishhooks found in East Timor (between 23,000 and 16,000 years old) and New Ireland in Papua New Guinea (20,000 to 18,000 years old). The findings lend support to the idea that these early modern humans were more advanced with maritime technology than previously thought, and that they were capable of thriving on small, geographically isolated islands.

This finding possibly reverses the finding that fishing technology emerged from the south Island South East Asia, diffusing northwards along the Pacific Rim. The direction of diffusion may thus have been in the opposite direction. While archaeologists may have found the oldest fishhook artefacts and this is evidence of early fishing technology in the Pacific Rim region, the oldest known maritime fishers were previously believed to have been the nearby prehistoric Timor islanders. See Fishing techniques of the Jomon people may have diffused from fishermen of the Wallacea-Spice Islander / Sundaland-Sahul region

This finding would also be more concordant with Matsumoto’s GM study The origin of the Japanese race based on genetic markers of immunoglobin G  which found that none of the Japanese populations surveyed, including the Ainu or those from the Okinawa and southern islands shared the same GM marker pattern as southern Melanesian or Micronesian groups southern group, who showed a remarkably high frequency of the afb1b3 marker (excepting a very small component of the mainland Japanese in Osaka and Sendai that attributable to later admixing influxes from the continent). Other Japanese early fishing technology have shown similarities to prehistoric Northeast Pacific Rim fishing lithics.