Tag Archives: Boats of the Underworld 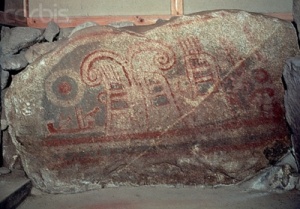 A distinctive spiral form motif appears on the painted mural walls of tombs in Western Japan of the Kofun Period. Depicted in the photo of the tomb mural above, the “ram’s horn” symbol appears as a herald banner on a funerary “Boat of the Underworld” scene (a fairly universal motif and belief in ancient times).

Thought locally to represent warabi fernfronds, they are actually recognizable tamgas and cultural motifs from specific Turkic clans of (Karakalpak, Kazakh, Qipchak) Central Asia, known as rams’ horns, though they have become common rug motifs today seen along the migration trail blazed by the Turkic tribes through lands in antiquity times.

A closeup section of the Ozuka tumulus (Fukuoka, Kyushu) shows the repetitive motif of the ram’s horn in an animalistic context rather than vegetative one

The marked appearance of the ram’s horns pattern raises the intriguing and strong suggestion of the arrival of certain ancestral Turkic lineages in Japan. This is especially distinctive in the light of the total absence of sheep and rams as an animal species in the Japanese archipelago. Alternatively, the motif came from the East, diffusing westwards.

The ram’s horn motif on a 5th c. Armour ( 国立中央博物館) suggests a male virility and valour motif. The artefact is thought to be associated closely with the Korean Kaya confederation of tribes, some of which may thus have been of  Turkic lineages

“THE ORIGIN OF THE DESIGN

The motifs of this type of rugs have pre-Islamic Turkic totemic sources. Many geometric devices used in Oysuzlu type of rugs can be found commonly in rugs of Turkic speaking people of Central Asia: Turkmen, Kyrghyz, Kazak* and Karakalpak.

Although the design is attributed to Oysuzlu by L. Kerimov, it is almost certainly known that the rugs with this specific design were produced in the villages of Lowland Bordjalou Region, not in Oysuzlu village of Tovuz District (Kazak Region). The main feature of this design is having two interlocked grounds in the central field: the green and red areas in this example (background vs. foreground).

The cruciform device inside the ketebe of the central medallion is often found in Kazak, Ganja, Bordjalou and even in some Kuba rugs in different forms. The device basically consists of a cross with the four ends of which terminate in a pair of horns. Here are the same type of hooked devices in various shapes used in so called “Sewan” rugs.

What does this motif represent for? It could well be representing a tamga – a mark used mainly by Turkic people representing an emblem of a particular tribe or a clan. They used tamgas to identify property or cattle belonging to a specific Turkic clan, usually as a stamp. Some tribes, like the Ak Koyunlu (White Sheep), put their tamga on their flags and stamped their coinage with it.

A considerable number of Kyrgyz and Kazak rugs contain a motif frequently described as Karakalpak kochot. The similarity of the Karakalpak kochot and Borchaly/Oysuzlu device is clear. Karakalpak kochot also consists of a cross, the four ends of which terminate in a pair of horns. A very similar motif occurs in the embroidery of the Karakalpaks of the Aral delta (especially on the top of skull caps). In fact, this motif can be found in the applied art works of all Turkic People, from Central Asia to Iran, from Caucasia to Anatolia:

Koch or Kosh (qošqar) means a ram in all Turkic languages. As the name of this motif in Kyrgyz and Karakalpak is related to a ram, this suggests us the motif could be representing ram’s horn.

The hooked gül /inner medallion which is containing the ketebe and the cruciform device can be related to the early Central Asian forms and a number of Turkish rugs from Anatolia.”

Source: Some notes on the so-called ‘Oysuzlu’ design

Although these motifs are most associated with Kazakh-Turkic-Qipchak peoples today, they were also seen as tamgas belonging to the Sarmatians of the 1st c.-mid 2nd c. AD. (See The Tamgas Were Marks of Identification of the Hungarian Tribes and of their Religion (Michelangelo.cn). (The earliest ram’s horn symbols may have appeared at Metsamor’s Karahunj astronomical observatories (around 3000 BC) indicating their early origins/presencein the region). Deborah Houlding in The origins of the constellations Taurus and Aries traces the Origin of the Aries-Taurus-ram’s horn symbol association to sun veneration (and the related turning of the ox’s wheel) by the Egyptians and Mesopotamians.

The immigrants buried in the Fukuoka tombs may have have a mixed Iranic(Sarmatian)-Turkic tribe (see Dybo on early Turkic contacts). Cockerel standards, terracotta and metallurgy motifs also proliferate from the 3rd c. tumulus mounds onwards, the cock is a well-known known Sarmatian standard and tamgas symbol. The ram’s horn has been adopted as a symbol on the flag of the Crimean Tartars, an ethnic native Turkic group who arrived in the Crimea in thr 15th c.

The Metal Age nomadic tomb and warrior armour technology point to Eurasia as a source of the Mezurashii tomb “Solar Boat of the Underworld”, however, the close resemblance of the Austronesian motif of their ubiquitous “Spirit Boats”  on the Mannungul jar and on the Austronesian boat-houses leaves a perplexing question as to how and where the two cultures may have intermingled and adopted the same cosmology of the Underworld. See the Mananggul jar from the Philippines in the photo below, which carries both the spiral motif and “Spirit Boat” motif in the same combination as that of the Fukuoka tombs, minus the (West Asian-Egyptian) solar imagery. The Manunggul jar dated to 890-710B.C.E., may represent the same outflow migrations of Austronesian people from Southeast Asia, that also send branch migrations to Japan. The jar was found alongside of the Tabon man fossil, which is said to resemble either the Ainus or ancient Australian and Tasmanian fossils.

Genetics research suggests that the roots of the Austronesians lie in the zone of South China, Southeast China and East Asia(Kampuansai et al.,; Min-Sheng Peng et al. etc., scroll down to the bottom of this page for links to articles on Austronesian origins). The spirit boat cosmology appears to be shared by the haplogroup O tree from the earliest subclades. More research needs to be conducted on the early interactions between the Eurasians and the Austronesians/Austric peoples and on the diffusion of the shared ideas and technologies.

The tamga by Richard Wright

Exploring the River of the Dead … (Heritage of Japan)

Houlding, Deborah : “The origins of the constellations Taurus and Aries   In ancient Egypt the ram was revered as an emblem of the Sun and held inviolate except during the New Year ceremonies when lambs were offered to the Sun in sacrifice.[9] This was a time of great spiritual significance; the re-emergence of the Sun, the resurrection of the light, the resurrection of God. Like the mythical phoenix, which arose in its own ashes, the ram was chosen as a natural symbol of resurrection because of its ability, when shorn, to replenish its stock of wool”
Note however: The appearance of the ram’s horn Taurus-Aries symbol on the at least 3000 BC old Metsamor Karahunj astronomy observatory (in Armenia)  suggests that she may be wrong about Egyptian use of the symbol predating that of the Mesopotamians.